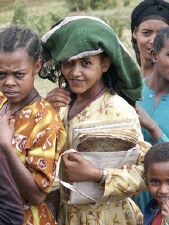 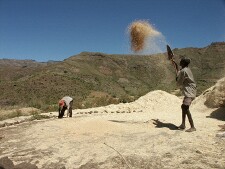 Ethiopian tradition has it that the first king, Menelik I, was the son of the Queen of Sheba and King Solomon, in 10th Century BC. Ethiopia largely converted to christianity in the 4th and 5th centuries, AD (well before most of Europe).  With the rise of Islam in the 7th century, the government based in Axum lost control of the Red Sea trading routes, and for 700 years the country was largely in chaos. But even during this period, the kingdom controlled and extended its influence over the Ethiopian Highlands, governing a large and expanding Christian Empire. The rock-churches date from this period.

Order was restored in the 13th century with the founding of a new Solomonic dynasty.  This lasted two centuries, until a successful war to prevent Somali encroachment weakened the nation, resulting in another three hundred years of civil war.  Finally, in 1889, Menelik II, supported by Italy, instituted a new Government.  Italy attempted to invade Ethiopia in 1895 but was decisively defeated at Aduwa in 1896, a victory which is remembered and celebrated by all Ethiopians.

Haile Selassie, who became Emperor in 1930, faced a renewed Italian threat, which culminated in a full-scale invasion in 1935, as a result of Mussolini’s desire to build an Italian empire. Ethiopia was briefly occupied, until it was liberated by the British in 1941.   In 1952, the the former Italian colony of Eritrea was joined in a federation with Ethiopia by the United Nations. Eritrea was annexed in 1962.

In 1974 Haile Selassie was overthrown by army officers who proclaimed a socialist state.  Colonel Mengistu Haile Mariam , a prolific murderer, established himself as an authoritarian president in 1977.  Under Mengistu, Ethiopia experienced serious political and economic problems, particularly a secessionist movement in Eritrea, a rebellion in Tigré province in the north, war with Somalia over the Ogaden, and a drought that became a widespread famine, exacerbated in part by the regime’s initial unwillingness to face up to the growing crisis.  In 1991, as his army was forced back by Eritrean and Tigrayan rebels, Mengistu fled into exile.  Tigréan soldiers subsequently captured Addis Ababa, establishing an interim government with Meles Zenawi as President.

Partly as a result of a pact made between the rebel groups during the civil war, in 1993 Eritrea became independent.  In 1994, a new constitution that made Ethiopia a multi-party federal republic.  In 1998, Eritrea and Ethiopia went to war over a border dispute, which has now been settled by an international commission. 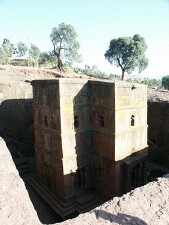 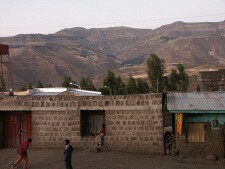 Even if it requires a detour from your cycling, you must visit Lalibela. This is a remote village, perched at 2630 metres in craggy mountains, which is famous for churches hewn into the solid rock. These are an incredible accomplishment from the 12th Century, made even more astonishing by the lack of any adequate explanation of how they were built, when there is no archaelogical evidence of there having been a community large enough to have provided the labour.

Visiting Lalibela is like dropping in to a scene in the Old Testament. Donkeys move through the streets, laden with goods brought from the surrounding countryside, among the priests and monks, who are responsible for sustaining and protecting the churches.

“If you wander between the churches in the thin light of morning, when white-robed hermits emerge, Bible in hand, from their cells to bask on the rocks, and the chill highland air is warmed by eucharistic drumbeats and gentle swaying chants, you can’t help but feel that you are witnessing a scene that is fundamentally little different to the one that has been enacted here every morning for century upon century” – Philip Briggs, Bradt Travel Guide. 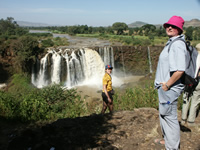 Situated on the edge of Lake Tana, Bahir Dar is a tranquil lake-side town. It has plenty of good hotels and restaurants.

We took a boat to visit monastries on islands in Lake Tana. (Beware: some of the monastries do not admit women), which makes a very pleasant way to spend a morning. You can also view the source of the Blue Nile, which starts its journey to Khartoum from Lake Tana (the source of the Nile is known in Ethiopia as Ghion).

About 30km from the source of the Blue Nile is Tis Abay – the Blue Nile Falls. These are Africa’s second biggest waterfall (after Victoria Falls). This is a half-day excursion from Bahir Dar; you can arrange a tourist trip, or catch a bus from the central bus station to Tis Abay.

Addis Ababa means “new flower”. In the central highlands, the altitude is 2,400-2,500 metres. It is a very vibrant city, which can be a bit intimidating and overwhelming at first, especially if you have not visited a big city in a developing country before. But once you get used to it, Addis Ababa grows on you; it has lots of interesting things to do, from visiting churches to mountain biking in Entoto; the people are friendly; and there are lots of facilities including hotels, restaurants and shops.

You should make time to visit the Mercato, the huge market (the largest in Africa) where you can buy almost anything. You should also visit the Holy Trinity (Kiddist Selassie) Cathedral, now famous as the resting place of Haile Selassie.

There is excellent Italian food (among the best we have had anywhere in the world) at Castelli’s Restaurant. For an accessible introduction to Ethiopian food, go to the Karamara Restaurant on the Bole Road. Other good restaurants include Blu Tops (near Arrat Kilo) and the Top View Restaurant.

1 thought on “History and sights”