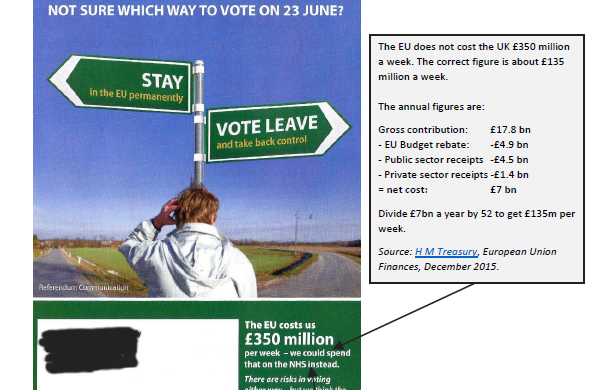 We received a leaflet today from the Vote Leave campaign, purporting to be an EU Myth Buster. It contains a number of statements which are untrue or misleading, such as:

Presumably the Vote Leave campaign knows these statements are false or misleading, and they don’t care. When did it become acceptable in Britain for a mainstream political campaign to say things which they know to be untrue?

I do understand that the the public is disgruntled with politicians and technocrats, and Vote Leave are exploiting this opportunity to say things that they know to be untrue or misleading, expecting that the public will have little sympathy with “experts” who try to put a more factual, evidence-based or nuanced view.  In this respect, they are pursuing the same kind of campaign as Donald Trump, who has recognised that popular dissatisfaction with the establishment gives him room to lie and to stir up all kinds of hatred and prejudice.  In my view it is very dangerous for any society to allow this kind of populism and disregard for the truth to take hold.

But in the end I am a technocrat – working in a think tank and in a university – so all I can do is continue to do what I know how to do, which is to try to share what I know and what the evidence and expert opinion tells us.  I have annotated the leaflet, highlighting where the leaflet is factually wrong and explaining the issues as I see them.  I would welcome comments.

14 thoughts on “Brexit and Truthiness”