Finding a cure for Ebola 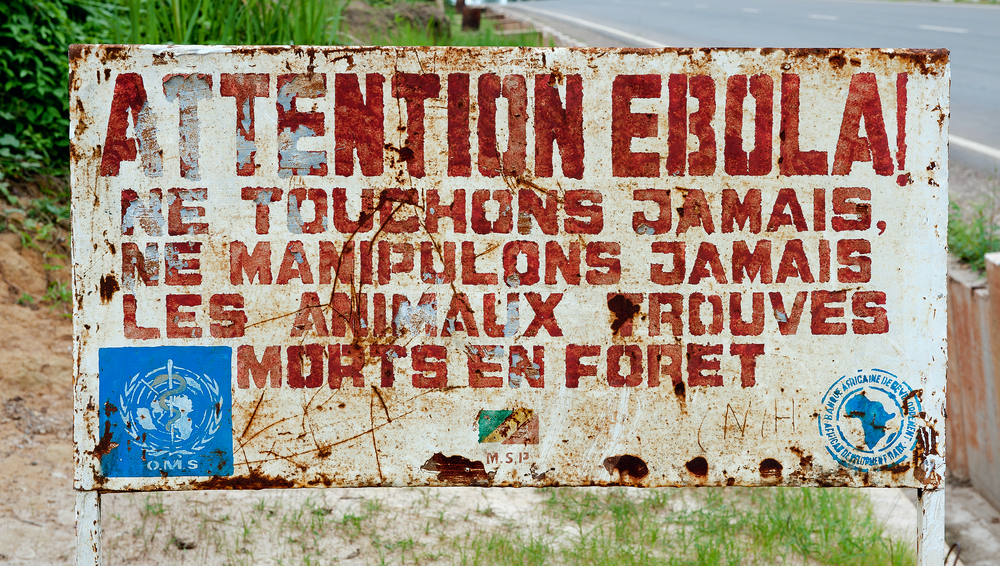 This blog post first appeared on Views from the Center

The priority for policymakers concerned about the Ebola epidemic in West Africa should be to respond to the existing outbreak, treat the victims, and contain its spread.

But many have begun thinking about the medium- and long-term implications of Ebola. For example, the Vaccine Alliance (GAVI) has been asked to think about how it can help speed up the development of an Ebola vaccine.

There are two things we need to do. First, set sensible cost-effectiveness thresholds for investments in global health, and so increase our willingness to invest. Second, make an Advance Market Commitment to accelerate the development of new vaccines, for Ebola and for other neglected diseases. Here’s why.

Why Is There No Vaccine?

The normal rule of thumb is that it costs about $1 billion on average to develop a new drug or vaccine. Even if we succeeded in developing an Ebola vaccine, it might not be included in routine vaccination programmes because the disease is so uncommon, which means the costs and potential side effects of routine vaccination are unlikely to be justified by the benefits. So we would probably stockpile an Ebola vaccine to limit an outbreak instead.  No company is going to make a purely commercial decision to invest a lot of money in developing a vaccine for which there would be such a small and uncertain market.

So if we want to develop an Ebola vaccine, governments and donors have to either finance the R&D directly or create a viable market for the vaccine if it is developed, or some combination of the two.

Why Don’t Donors Pay for Vaccines for Diseases like Ebola?

Researching, developing, and providing access to medicines that prevent and treat infectious diseases is a very effective form of development cooperation. (This is why Angus Deaton suggests that donors should spend money for developing countries, but not in developing countries.)  So why haven’t donors paid enough to develop vaccines against diseases like Ebola?

This rule of thumb puts a very low value on the lives of poor people, far below the value we place on the lives of citizens in wealthy countries. For example, the National Health Service considers an investment in the health of British citizens worthwhile if the cost is less than $50,000 per DALY averted.  Even this much more expensive threshold is regarded as too low: there are frequent campaigns in the British press for the NHS to be allowed to pay for more expensive treatments.  So donors value the life of someone in Britain twenty times more than the life of someone in Sierra Leone.

Because Ebola is relatively rare, donors will only invest in a vaccine if they place a relatively high value on the lives of people in developing countries.  At $150 per DALY averted they would spend only about $20 million for an Ebola vaccine, which is not nearly enough. At a higher threshold of $2,500 per DALY averted, donors should be willing to spend about $300 million.  Even if you think that the estimated $1 billion cost of developing a new drug or vaccine is an exaggeration, an investment of $300 million is unlikely to be sufficient to finance the development, approval, production, and distribution of a new vaccine.

So the reason we don’t have a vaccine against Ebola is that the likely victims of the disease are not wealthy enough to pay for the full cost of these medicines; and donors don’t invest enough in developing drugs and vaccines for relatively rare diseases like Ebola because the value they place on the lives of people in developing countries is too low.

The Cost-Effectiveness Thresholds Are Too Low

The Ebola outbreak reminds us that there are very substantial direct costs of dealing with an outbreak of disease: the WHO estimated in August that the current Ebola outbreak will require about $490 million. On top of this, there are indirect economic costs to the countries affected: the World Bank estimates suggest that Ebola will reduce economic output by something like $1 billion (though these estimates are very uncertain). This does not include the economic impact on developed countries, for which no estimates have been published. We cannot insulate ourselves and our citizens from the risks of infectious disease, nor the wider economic effects of restrictions in trade, investment, and the movement of people, nor the need for a humanitarian response.

This means there are three reasons why we have to put a higher value on the lives of people in developing countries when deciding whether to invest in prevention. First, it is plainly immoral to value other people so little relative to ourselves. Second, when outbreaks do happen, donor countries in practice have to meet substantial direct costs of treating people and containing the spread of the disease. Third, there are real and growing economic costs. 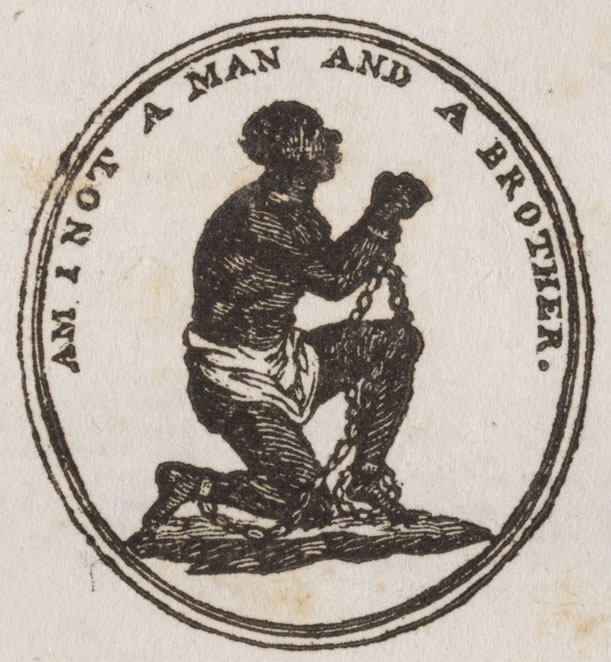 Josiah Wedgwood’s image of an enslaved African, kneeling, manacled hands outstretched, with the title ‘Am I not a man and a brother’, is a symbol of the struggle for abolition and eventual emancipation of slaves.

For these three reasons, it is neither moral nor practical to continue to value the lives of people in developing countries at $150-$5000 per DALY, when we value our own lives at $50,000 per DALY.  (My own preference would be to value all lives everywhere equally.)  But there are also significant direct and economic costs of disease, over and above the impacts on people’s health, which should also be taken into account when donors consider the cost effectiveness of investments in global health. These costs can either be taken into account in the calculations separately, or by increasing the cost-effectiveness thresholds. Whether you share my view that we should value all people equally, or whether you merely take a pragmatic view about the long-term costs to industrialized countries of a failure to invest in prevention of global health problems, it is clear that industrialized countries should be spending more on global health, and that the existing cost-effectiveness thresholds are too low.

How to Spend $1.25 Billion on Preventing Diseases

It would obviously have been far better to have prevented Ebola, or kept it from spreading, than to be obliged to spend as much money as we are now to contain the epidemic.  As well as developing new medicines, that investment could have taken the form of strengthening health systems to cope with outbreaks of infectious disease, increasing capacity in the WHO, and improved disease surveillance and international rapid response mechanisms, all of which would increase resilience against a wide range of diseases.

A very good way to fund the development of new vaccines and drugs would be through an Advance Market Commitment, which harnesses the finance, innovation, and inventiveness of the private sector to tackle diseases.

The pneumococcal Advance Market Commitment introduced in June 2009 was intended to be a pilot of the AMC mechanism. As a result of this AMC, children in over 25 countries are now being immunized against the main cause of pneumonia. The mechanism has been shown to work: it should now be used for other diseases.

Using an Advance Market Commitment has the advantage that if a vaccine or treatment cannot be found, it will not cost the donors anything. And if it works, the costs of paying for a vaccine under an AMC are far lower than the human and economic costs of treating the disease.

The prospects for an Ebola medicine seem more promising than for some other diseases, which suggests that a relatively small AMC could be effective.

Fight the Next War, Not the Last One

At a threshold of $10,000 per DALY, it would also be cost effective to invest in solutions to many other neglected tropical diseases and health conditions in the developing world.  We should be spending much more on widespread diseases such as malaria, HIV, and tuberculosis. So adopting a higher cost-effectiveness threshold should mean a substantial increase in spending on global health research and development and spending more on health systems.

To develop new vaccines and drugs, donors could establish a substantial pooled fund for Advance Market Commitments for diseases which mainly affect people in developing countries.  Another possible approach to this would be the Health Impact Fund, which is promoted by Thomas Pogge, Aidan Hollis, Kenneth Arrow, Amartya Sen, and Paul Farmer.

The root of our failure to invest in new pharmaceuticals, health systems, and disease surveillance is that donors put too little value on the lives of people of developing countries and spend too little on global health.

At the values they conventionally use in cost-benefit analysis, donors are not willing to spend enough on health prevention to justify the development of new medicines.

But this is neither moral nor practical. We spend much more on treatment, and generate avoidable economic costs, because we underinvest in prevention.

Changing the cost-effectiveness threshold to $10,000 per DALY — which is a fifth of what the UK spends on itself — would transform the arithmetic of investment in health prevention.

It would justify a series of new Advance Market Commitments for neglected diseases at a level which would be likely to have a substantial effect on the incentives facing commercial pharmaceutical companies. Many exaggerated claims are made about the unique opportunities of our age: but we really could, if we decided to, create sufficient incentives for innovation and research and develop drugs and vaccines which will enable us to control these awful diseases. 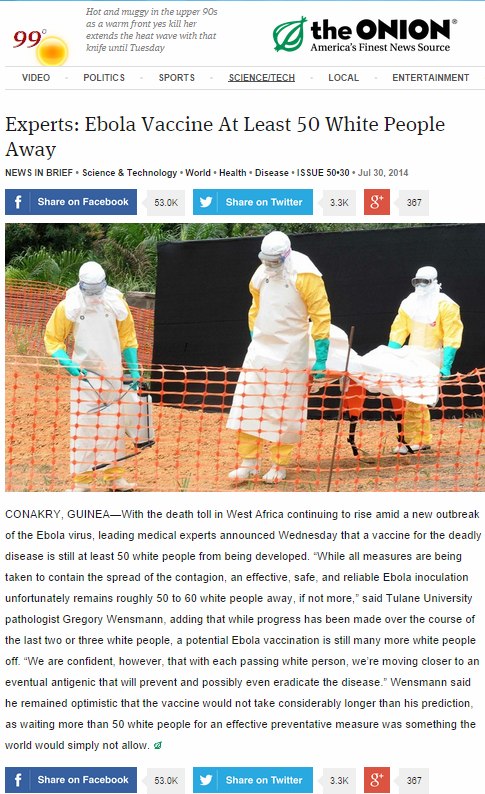 The Onion, a satirical newspaper, on why there is no Ebola vaccine

3 thoughts on “Finding a cure for Ebola”