Are rich country policies for development getting better? 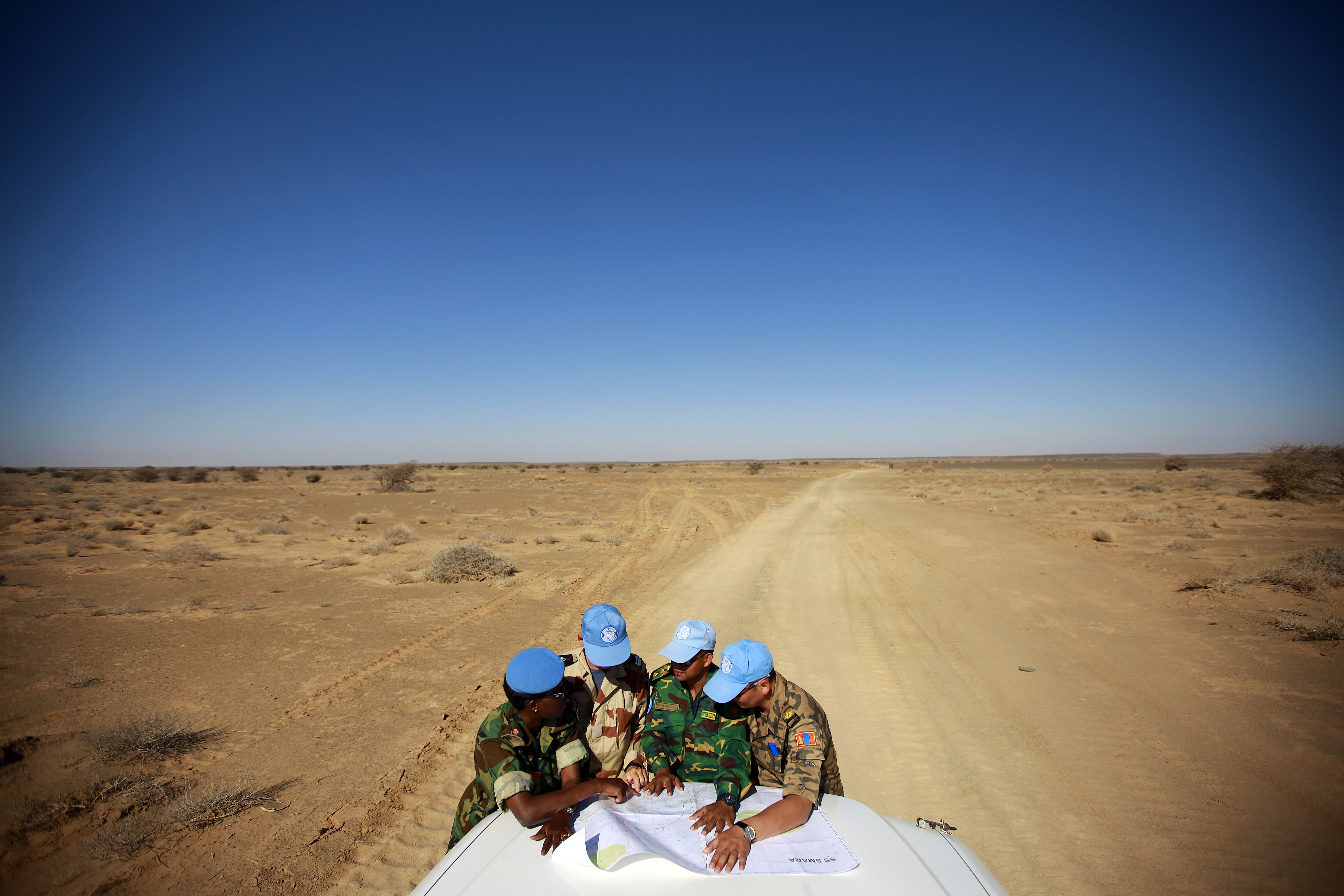 For the last decade, we have talked a lot of talk about new development partnerships; but have we walked the walk?

The Center for Global Development’s Commitment to Development Index, now in its eleventh year, gauges whether wealthy countries are pursuing development-friendly policies­–not just on aid but on many other things which matter for development.  We recently announced the 2013 results here.  After 11 years of calculating the index we can ask the question: have the policies of rich countries got better over time? The answer: Yes, but less than you would think. Scores in environment have improved the most, from an average of 4.1 to 5.5. Aid, finance, and technology have also improved slightly while security, migration, and trade have trended down.

If we were measuring rhetoric, all our indicators would be in good shape. There has been a lot of talk about “policy coherence” (horrible phrase) over the years. In 2002 the Monterrey Consensus called for “a new partnership between developed and developing countries” and for “enhancing the coherence and consistency of the international monetary, financial and trading systems.”  Similar aspirations for better policies were repeated at the Gleneagles G-8 summit in 2005 and the Busan High Level Forum in 2011. The club of rich countries, the OECD, approved in 2012 an entire Development Strategy devoted to improving their policies.

But rhetoric is not the same as reality. In 2005, even as the G-8 leaders were committing themselves in Gleneagles to reducing trade barriers for developing countries, their representatives at a WTO meeting in Geneva were blocking an end to export subsidies which undermine developing country farmers.

The Commitment to Development uses data rather than communiques to assess the policies of affluent countries. We distil hundreds of quantitative indicators of policies into seven components: aid, trade, finance, migration, environment, security, and technology transfer. We calculate scores for 27 high-income countries on each of these seven components, and then add them up into an overall rating.

Reasonable people can disagree about the relative importance of the different indicators but you would expect to see some improvement in them overall if affluent countries were living up to their promises to pursue more development-friendly policies.

We sometimes change the way we calculate the index, in the light of new data or new thinking about how the policies of rich countries affect the developing world. Whenever we make a technical change, we recalculate the index as best we can for past years using today’s definition of the index, so that changes in the published scores over time reflect changes in policies rather than our meddling with the definitions.

We have added up the scores for the 21 OECD countries which have been in the CDI since it began in 2003, suitably weighted, to see whether they have collectively lived up to their promises to improve their policies.  Here are the results: 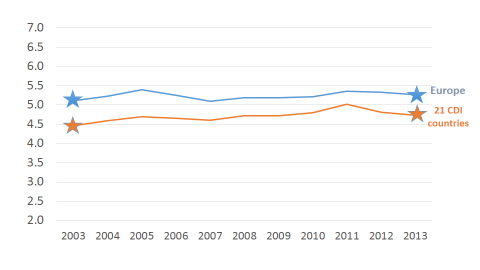 As you can see, overall, the Commitment to Development Index has improved only very slightly over 11 years. Chart 2 below shows how individual components have changed over time. As you can see, policies on environment and aid have improved a little, while policies on security are now noticeably worse overall than in 2003. On trade, finance, technology, and migration there has been very little change over the last ten years. 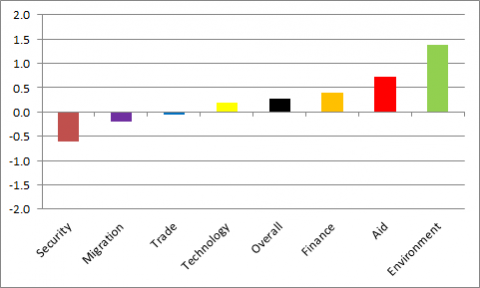 We discussed  the environment scores in our last blog post: the main driver of the improvements was the agreement to reduce the emission of ozone-depleting gases. The improvement in the aid component is entirely driven by an increase in aid volumes: aid from these countries has increased from 0.22% to 0.31% of GNI on average. This increase in the quantity of aid has unfortunately been offset in the scores by a reduction in its quality, at least according to our indicators. The modest improvement in the finance component reflects greater participation in international agreements to prevent bribery and corruption (such as the Extractive Industries Transparency Initiative and the Kimberley Process).

The marked fall in security scores reflects two trends in the policies of wealthy countries with negative consequences for the developing worlds. First, arms sales to poor and undemocratic countries have increased over time, with Sweden and France heading the wall of shame. Second, contributions to UN peacekeeping operations and budgets have decreased. The reduction in migration reflects a reduction in the number of refugees accepted by the 21 countries.

It is hard not to conclude that there is a noticeable discrepancy between the rhetoric of wealthy nations and their behavior. According to the Commitment to Development Index, compiled from hundreds of different indicators, there has been no significant improvement overall in the policies of rich countries over the 11 years we have been collecting and publishing the data. Perhaps the post-2015 framework should set more explicit goals for wealthy countries, and use a framework like the CDI to track progress. In our next blog post, we’ll look at the good news, which is that there are plenty of opportunities for wealthy countries to make their policies more development-friendly by learning from each other.