Is this the science of delivery? 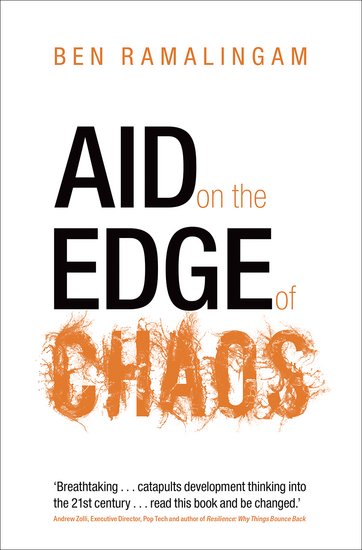 Ben Ramalingam’s book, Aid on the Edge of Chaos, which is published this week, may be the clearest answer we have yet to Jim Kim’s call for a “science of delivery”.

If anyone expects “science” in this context to mean the deconstruction of a problem into a series of individually tractable problems, which can be solved and then reassembled into a coherent whole, then this book will disabuse them of that notion.

We all know that development is complicated; and that no single, simple solution will unlock it.  But the ‘logical framework’ approach to development assistance nonetheless requires us to break the problem into a series of parts, each to be addressed by a set of activities. If all these activities are delivered, the logframe reasoning goes, then the overall goal will be achieved.

Aid on the Edge of Chaos explains why this reductionist thinking will never work. If a problem is complex, it will not be solved by ever deeper analysis nor by breaking the problem into a larger number of pieces. As Tim Harford showed in his book Adapt, all successful complex systems are the result of adaptation and evolution.  Many in the world of development policy accepted intellectually the story in Adapt but were left wondering how they could, practically and ethically, manage aid projects adaptively when they were dealing with human lives.

Ben Ramalingam’s book helps fill that void. Ben combines knowledge and experience of how development programmes are managed, with a clear understanding of complex adaptive systems. He shows that the simplifications so often made about economic and social change are not only misleading, they are potentially damaging. His book is essential reading for anyone who wants to think seriously about how development happens, and about what can be done to accelerate it.

The implications for economic systems ought to be obvious; yet economics – and development economics in particular – seems remarkably impervious to learning these lessons from science.  (Eric Beinhocker is the most important exception, in his book The Origin of Wealth.) The reasons for this are mystifying. Both the theory and the data suggest that the economies are complex adaptive systems. And if this is the case, then then our rules of thumb for how these systems might behave are deeply flawed.

Twenty five years ago, when I was a young UK Treasury economist, one of the articles which had most impact on me professionally had been written not by an economist but a biologist. Bob May’s 1976 article in Nature on non-linear dynamics made me realise that other disciplines, notably in the physical and biological sciences, had a better grasp of the dynamics of non-linear systems than we did in economics. The converse was also true, incidentally: I remember being shocked by how little biologists understood about the statistical analysis of time series.  I later had the opportunity to meet Bob May (by then, Sir Robert, now Lord May) when he was the government’s Chief Scientific Adviser and I dealt with science policy in the UK Prime Minister’s office.  I was much more starstruck by him than many of the other celebrities who walked through the famous front door of No.10.  Lord May’s recent work on the financial crisis with Andy Haldane of the Bank of England is one of the many memorable case studies in Ben’s book.

My job in those days in the Treasury was doing simulations on the UK Treasury model to predict the broader economic effects of changes in macroeconomic policy.  I learned how to coax the model into solutions much like a jockey might learn to ride a horse. And of course it was apparent to me that our economic model – and perhaps the economy we were trying to model – was highly non-linear and its behaviour was better characterised by the mathematics of chaos than the equilibrium model commonly assumed by economists.  With small tweaks to key parameters – all within the margin of error of our estimates – I could generate almost any result from the Treasury model that I (or Ministers) wanted to produce. More importantly, small changes to key parameters would change not only the results but the entire system dynamics: I could set the model off into what appeared to be random motion (but wasn’t), into cycles, cause it to explode or converge. Yet my efforts to persuade my colleagues that we should pay more attention to non-linear dynamics were dismissed as youthful exuberance. As a profession, we thought we already understood that many of the relationships we were dealing with were non-linear, and that the systems were studied were complicated, but many of us thought our linear approximations were good enough to guide policy in an imperfect world.

Professionals from other disciplines than economics have often complained about the tyranny of economic ideas in development. Before they start popping the champagne corks, however, they too should read this book carefully. Managing development programmes in a complex world does not mean abandoning the drive to improve value for money. Iteration and adaptation will often require the collection of more data and more rigorous analysis – indeed, it often calls for a focus on results and ‘learning by measuring’ which many people in development may find uncomfortable. These groups too have much to learn from the science of complexity.

You probably don’t need to read a book telling you that development is complicated and unpredictable. But you might want to read a book which tells you that the dynamics of development are similar to those of many other systems, and what we might do to navigate these dynamics better. Aid on the Edge of Chaos brings science to development – not the reductionist science of high-school physics but the beauty and depth of understanding that scientists have assembled about the regularities and patterns in our natural, social and economic world. I think this is one of the most important books you will read about development.

Please add your comments on this post at Views from the Center.