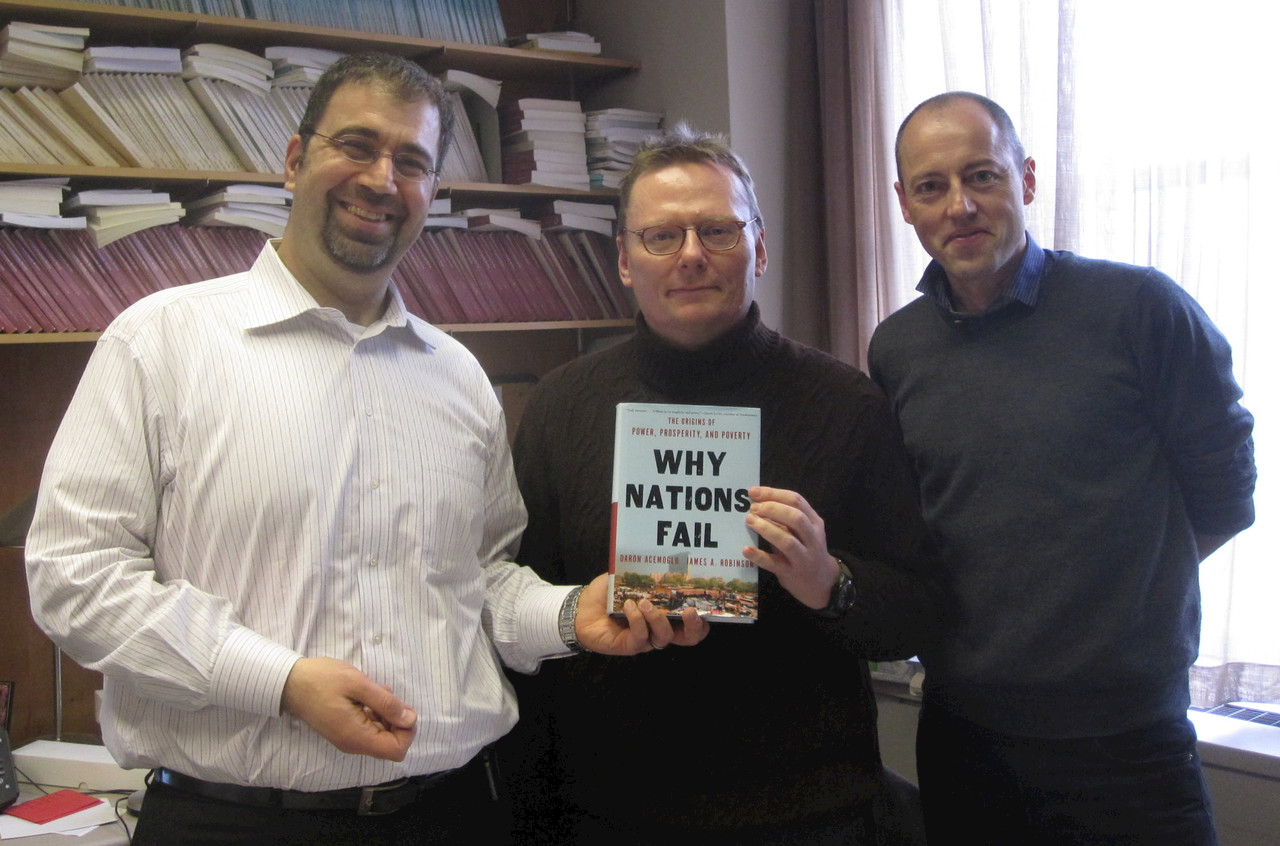 One of the things I learned in a quarter of a century as a civil servant is that the public has a great deal of common sense.  Any minister or department which thinks it knows better than the broad swathe of public opinion (a) is probably wrong and (b) won’t last long anyway, whether they are right or not.

One thing that the public knows, which many development experts apparently do not, is that poor countries are poor because they are badly governed. According to Daron Acemoğlu and Jim Robinson, the authors of Why Nations Fail, the public is right: poor countries are poor because they have institutions which prevent growth and enable a small elite to capture the nation’s wealth.

Why Nations Fail is one of the most important books published about international development in the last decade. If you don’t have time to read 450 pages of analysis and evidence, you can get a flavour of the book by listening to my hour-long Development Drums podcast with the authors. They argue that bad government – in the form of bad institutions and policies – explain why some nations have achieved economic success and other have not. (If podcasts are not your thing, you can read the transcript here.)

The importance of institutions for development is not very exciting: it is already obvious to everyone down the Dog & Duck even if many development experts do not wish to believe it. But that is only the first part of the story.

The interesting part of Why Nations Fail is the explanation of why these bad institutions and policies persist. If the nation would be more successful with better policies and institutions, why don’t governments fix them? According to Acemoğlu & Robinson, bad institutions and policies are not the result of ignorance, geography or accident but of deliberate choices by governing elites who benefit from those bad policies, even if their fellow citizens do not.  The nation as a whole might be better off with more competitive markets, a more educated population, the spread of property rights, or liberalised telecommunications, but the current ruling elite almost certainly will not be. Bad institutions persist because they suit the powerful.

In short: it’s the politics, stupid.

So how does change happen? This is where I found Acemoğlu & Robinson least helpful. They say change happens at what they call “critical junctures”. These moments are difficult to anticipate, and it is dangerous to try to trigger them; it is also hard to predict whether the change which ensues will put the country on the path towards a more inclusive set of institutions, or just lead to the establishment of a new elite. The outcome depends on very fine grained details about the situation and perhaps a bit of luck. That doesn’t take us very far towards a theory of what, if anything, people can do to bring about and accelerate positive change.

At risk of undermining my claim that the ‘public knows best’, I think many people in richer countries overestimate the role that outsiders can play in bringing about political change. If Acemoğlu & Robinson are right that bad institutions are there for a reason then it seems unlikely that that those reasons will be altered much by earnest efforts of development cooperation such as policy dialogue and technical assistance. If a country’s elite is not inspired to remove the obstacles to economic development by the benefits it would bring for their people, the threat that some aid to those people might be withdrawn is hardly likely to change their mind (even if such a threat were credible, which it hardly ever is). If a country’s elite wants to improve public financial management, they can easily and cheaply obtain the expertise they need without any help from donors; and if they don’t want sound public finances, then donors pushing it down their throat won’t make it happen.

The aid business has long recognized that change only happens when there is “country ownership”, an idea which has been elevated to one of the five internationally-agreed principles of aid effectiveness. In the world of policy dialogue, the principle of “country ownership” is honoured more in rhetoric than reality. The donor dilemma is this: if political and institutional change requires commitment more than money, then it is hard to see what role donors can usefully play. Either the governing elite supports change, in which case donors bring nothing to the party, or the elite is happy with how things are, in which case no amount of donor pressure is likely change their mind.

So Acemoğlu & Robinson’s theory suggests that the normal array of development policy instruments – technical assistance programmes, aid conditionality, and backing reformers – are very unlikely to work to accelerate political and institutional change. What’s more, that prediction is amply borne out by experience.  Aid works to vaccinate children or send them to school, but there is scant evidence that donors have done anything to bring about beneficial political change.

This is all very discouraging for development agencies. The common-sense view – given academic heft by Why Nations Fail – that poverty is  caused by bad institutions which are the result of an unhappy but self-perpetuating political settlement is bad news for development agencies who don’t have many lines in this script. Rather than accept that there is little place for the well-meaning outsider wanting to accelerate change, aid agencies fall back on optimistic talk about the “science of delivery“, as if the challenges were technical rather than political, which they can support with their “solutions bank“.

If we think of politics as an endogenous characteristic of a complex system, then perhaps we have more hope of accelerating development by trying to tweak the internal feedback loops, and so shaping future system dynamics, than by offering exogenous solutions from the outside. I discussed this in two other recent episodes of Development Drums, one with Rakesh Rajani and Martin Tisné on openness and accountability, and the other with Duncan Green on his book, From Poverty to Power.  Matt Andrews also discusses the role of outsiders in The Limits of Institutional Reform in Development (video of his presentation at ODI here).  Inspiring as these thinkers and doers are, these conversations have left me believing that lasting political change happens from within, and there is little that we can do with our aid programmes to affect it.

That does not make me an aid sceptic: on the contrary, it makes more more convinced than ever that we should give aid to improve the quality of people’s lives, which it demonstrably can, for as long as it takes for development to take place in their country; and if we want to be optimistic we can hope that this might help countries to build more inclusive political institutions in the long run. But in general we should judge aid by its direct impact on people to whom it is given, not by its effects on political change or economic growth.

Nor do I think we should be entirely passive about the politics of developing countries. There is plenty of scope to change our approaches to investment, trade, illicit financial flows, corruption, international tax, migration, openness, global institutions, intellectual property, arms sales, peacekeeping, and security in ways which could help accelerate positive political change in developing countries. It seems to me a shame that we look first, and often only, to our aid programmes when we want to make a difference.

26 thoughts on “It’s the politics, stupid”