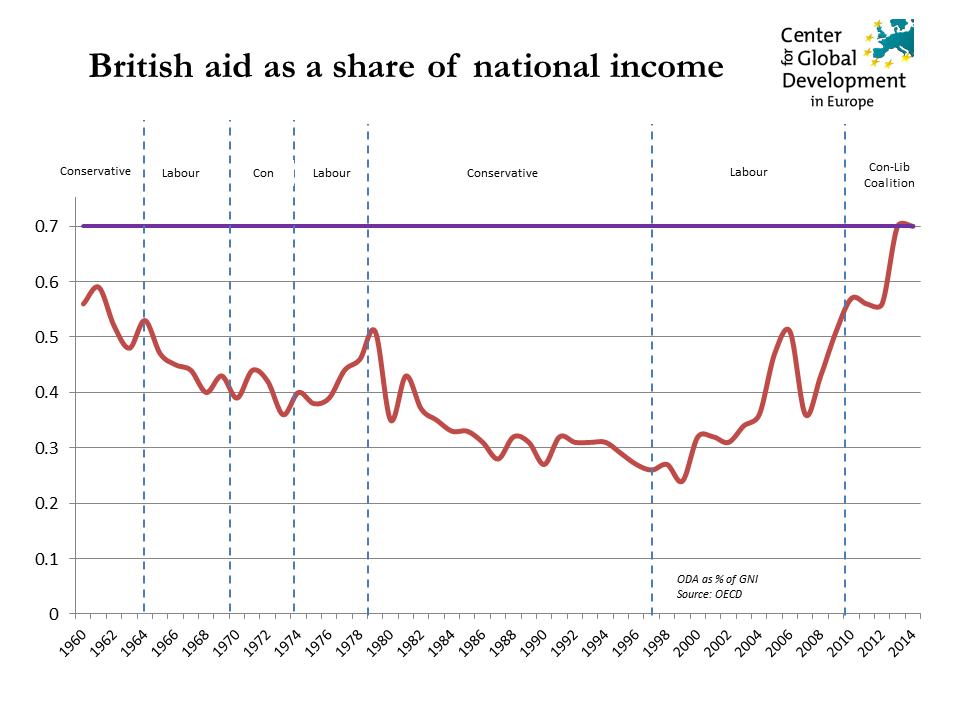 The budget presented today by Britain’s ruling coalition confirmed that the UK will meet the 0.7% target on foreign assistance in 2013.

This means that Britain will join Sweden, Norway, Luxembourg and Denmark as the first G-8 member of the small club of countries which meet the UN target – first agreed in 1970 – of spending 0.7% of Gross National Income (GNI) on Official Development Assistance (ODA). (The Netherlands, which has been above 0.7% every year since 1975, looks likely to leave the club in 2013).

Meeting the target entails a substantial increase in the DFID budget. According to the budget documents (page 69 of the Red Book), the DFID spending limit will rise from £7.8 bn in 2012-13 to £10.7 bn in 2013-14.  As far as I know, there is no peacetime precedent for a 37% increase from one year to the next in the budget of a UK government department with no change in its responsibilities.

The Government has also confirmed  – I believe for the first time – that the protection for the ODA budget will be continued into 2015-16. (See page 3 of the Red Book).

For readers not familiar with the UK’s budget system: these budget proposals are formally subject to approval by Parliament in July in the Main Supply Estimates; but Parliament normally approves the provision sought by the Government.

In absolute terms, the UK will overtake Germany to become the world’s second largest aid donor, with a budget of about $17 billion; a long way behind the United States which spends about $31 billion a year. (US foreign assistance, while large in absolute terms, is just 0.2% of national income.)

This increase in aid, in the context of a difficult fiscal position, is the result of a remarkable cross-party political consensus in Britain about the importance of development cooperation. This commitment has grown significantly since the establishment of DFID in 1997. (If you are interested, my 2005 Working Paper describes the reform of UK foreign assistance which helped establish this cross party agreement, in the context of British aid since colonial times.)