How committed is Europe to development really? 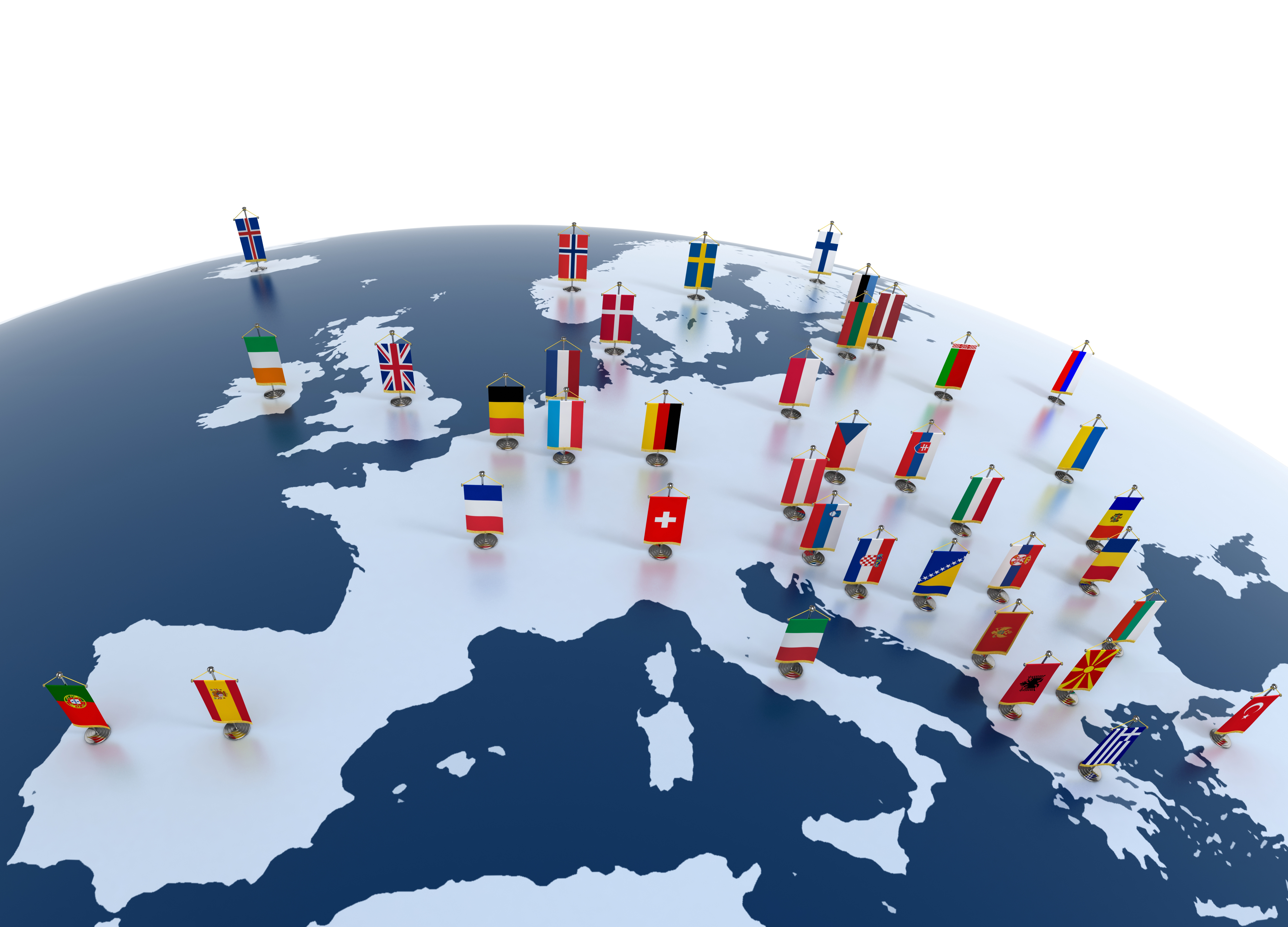 This joint post with Alice Lépissier and Liza Reynolds first appeared on Views from the Center.  It announces the launch of the Europe Beyond Aid initiative and presents a summary of the research and preliminary analysis in its first working paper.

Europeans more than pull their weight in aid to developing countries. Last year Europeans provided more than €60 billion ($80bn) in aid, more than two and a half times as much as the United States. European members account for just 40% of the national income of the Development Assistance Committee (DAC) but give more than 60% of the aid.

Furthermore, Europeans have reason to be proud of the quality of aid they give. They tend to focus on poverty eradication and sustainable development, and have largely shaken off the vested commercial interests in tied aid.

So if European countries are serious about development – and not just giving aid – then we must also consider how European policies on trade, investment, migration, environment, technology and security all affect the developing world.

Improvements in any of these policies could have much more impact on poverty and prosperity in poor countries than any increase in the quantity or quality of aid we are likely to make.  Taken together, they are far more important than aid for creating the conditions for development. Yet they get relatively little attention in development circles. 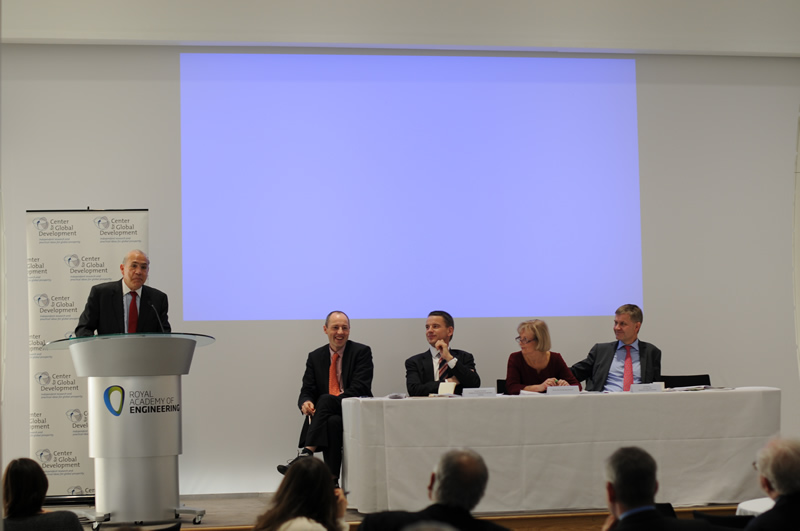 For the last ten years the Center for Global Development (CGD) has been keeping score of how well rich countries are living up to their promises to pursue more development-friendly policies in the Commitment to Development Index.  Now that CGD has a Europe programme, we have decided to use the CDI to look more closely at how well European countries are doing and to identify the main policy priorities.On Tuesday, CGD hosted an event in coordination with the DAC High Level Meeting in London, to launch our new Europe Beyond Aidinitiative. The Secretary General of the OECD, Ángel Gurría, gave a keynote speech about the importance of beyond aid issues for development. Panelists Christian Friis Bach, the Danish Minister for Development Cooperation, and Erik Solheim, the Chair-elect of the DAC, both argued that aid should be seen as just one instrument within a broader framework for cooperation.  (Denmark is top of the Commitment to Development Index this year.)

There are now 21 European countries included in the index (19 members of the EU, plus Norway and Switzerland). Some of those countries do extremely well: the top seven countries in the Commitment to Development Index are (in order): Denmark, Norway, Sweden, Luxembourg, Austria, Netherlands and Finland.

But might the saintliness of the Scandinavians and like-minded nations be concealing a much less impressive story across the rest of the continent?

To get a handle on this, we have this year added a facility to calculate the Commitment to Development Index as if Europe were a single country. This works by combining data for all the European countries in the index and weighting the results as usual in the index for the size of their economy and their population. You can try it for yourself if you go to the main CDI webpage and click “Europe as one”.

Given that Europe is far more generous than the rest of the world in the quantity and quality of aid it gives, you might expect it to top the world league in the Commitment to Development Index.  But when you do the calculation, it turns out that Europe’s performance overall is not great. Nor is it awful: when you look across Europe’s policy footprint on developing countries, as a whole Europe is about par for the course.  Both Canada and New Zealand do better. Other parts of the world do worse: interestingly, the countries which are further behind seem to be improving, and may soon close the gap on Europe. 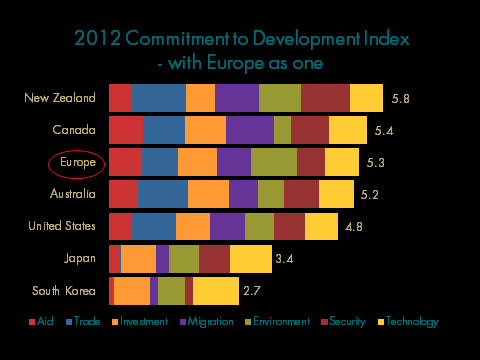 This is not an exercise in finger-pointing: the aim is to celebrate success and to understand where and how we can improve. To do that, we have to start by understanding where we are.

In a new Working Paper published yesterday, we set out the facts about Europe’s performance in the seven dimensions of the Commitment to Development Index.  It explores the highlights (and lowlights) of European policies as they affect development.

The big picture is fairly straightforward. Europe has generous and effective aid programmes, and makes a distinct contribution to global environmental challenges. But Europe’s policies on trade (especially agriculture), security and sharing technology have much less positive impact on development.

To generalize a little: Europe’s approach to development could be characterized as energetically tackling the symptoms of poor economic opportunities for developing countries by providing substantial and effective aid, while doing relatively little to tackle the underlying structural causes of poverty.

But dig beneath the surface, and things are (inevitably) more complicated.

There is considerable variation between countries in Europe (suggesting that many of the reasons for differences are not decided at EU level) and each country performs well in some areas and badly in others.  For example, Germany has among the best policies in the world for encouraging investment in the developing world, but is near the bottom of the pack on security because of its relatively small contribution to international peacekeeping operations and high levels of arms sales to poor and undemocratic governments. 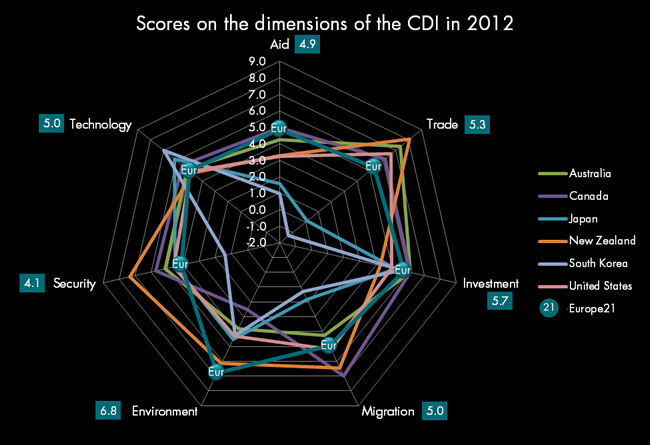 The good news is that these variations suggest that rapid progress is possible. Even if European countries – collectively and individually – do no more than identify and implement the best practice among them, the margin for improvement is huge. For example, though they have much in common, Denmark and Sweden are respectively ranked the best and worst in the world in the index on security policies. For Sweden to move from the bottom of the global league to join Denmark at the top, it would need to participate in major security treaties (for example, Sweden has not ratified the Convention on Cluster Munitions), and contribute to the protection of global sea lanes and to internationally-sanctioned peacekeeping operations. 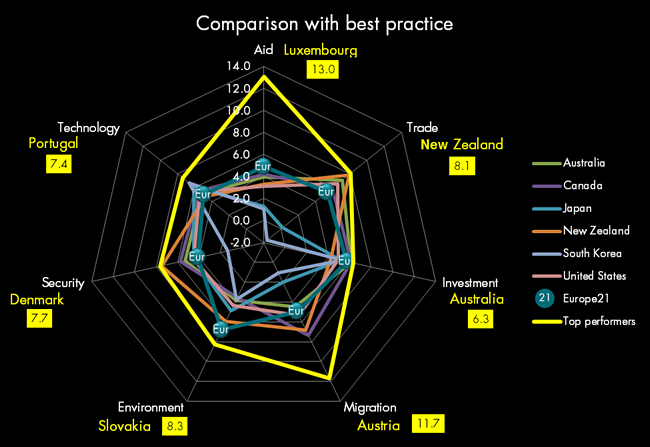 Though every country has its own political idiosyncrasies, the extent to which some countries fall behind best practice of their neighbours suggests that considerable improvement is well within the realms of political possibility.

To get a better handle on the opportunities for improvement, CGD in Europe is today launching our Europe Beyond Aid programme. We are working with leading experts across Europe and around the world to look carefully at Europe’s performance in each of the seven components of the Commitment to Development Index (namely, aid, trade, investment, migration, environment, security and technology). Each study will examine the performance of Europe together and as individual nations. It will assess the extent to which the room for improvement is primarily a question for the EU collectively, through the European Union, and the extent to which individual member states need to raise their game. The goal is to identify a policy agenda for European policy-makers in each of the seven policy areas.

Our first Working Paper – looking at Europe’s performance overall and written with David Roodman and Julia Clark – has now been published. Over time we will be publishing new working papers diving into the detail of each policy area (first up: technology transfer). We want to engage the experts and policy-makers across Europe in each of those, to arrive at a sound consensus about the steps Europe can take to improve its policy footprint in the developing world, and start to make good on the promise of Busan.