Powerful nations need to do more to reform the governance of the global institutions they dominate, says Owen Barder

Europe at the fin de siècle – the end of the 19th Century – is thought of today as an opulent, decadent and cynical end to la belle époque. This mood of fin de siècle is echoed in today’s development policies and aid agencies, similarly following a golden era for aid. Like the European elites of a century ago, the development policy community seems to be paralysed in the face of widely-anticipated (and largely desirable) change.

The structure, incentives and priorities of today’s aid agencies reflect their history in a disappearing era when development policy meant rich countries giving aid to poor countries for the alleviation of extreme poverty.

Today’s development challenges look quite different, in at least five ways. First, most of the world’s poor live in middle-income countries, such as China, India, Indonesia, Pakistan and Nigeria. Second, private investment, remittances and private giving are now far bigger than official aid. Third, there has been healthy growth in many developing countries, bringing increases in prosperity for many, but also great challenges of inequality, environmental degradation and dislocation. Fourth, we are moving from a world dominated by a few rich countries to broader spread of emerging global powers. Fifth and finally, we face a growing array of challenges requiring global solutions, including climate change, macroeconomic imbalances, inadequate financial regulation, tax avoidance, insecurity and corruption.

The past fifty years have seen unprecedented progress on almost every dimension of human well-being, including improvements in security, reductions in conflict, and the spread of access to water, food, shelter, health and education. These improvements have not been confined to fast growing countries like South Korea and China; there have also been remarkable improvements in countries which have seen relatively little economic growth in income, such as Mali and Burma. Many of these improvements have been supported and catalysed by foreign aid. As the world becomes more wealthy, we can afford to spend a rising share of our income on overseas aid; and it has been demonstrably successful.

But people from developing countries are clear that development policy today must mean more than giving aid. With growing economic success, they want to benefit more from the resources and services which they supply to the world. They do not want aid as compensation for global trade rules which are stacked against them: they want the rules changed. They do not want merely to be compensated for the damage done to the environment by industrialised countries; they want the destruction of our shared planet to stop.

Developing countries have made great progress on seven of the eightmillennium development goals. But there has been almost none on the eighth, for which the old rich world bears primary responsibility: “Develop a global partnership for development”. For example, the powerful nations have done little to improve the governance of global institutions which they dominate; nor have they developed, as they promised, open, rule-based, predictable, non-discriminatory trading and financial systems. 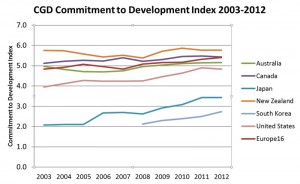 The Center for Global Development produces an annual index of commitment to development, which scores OECD countries on their policies on trade, the environment, migration, investment, technology transfer, security and aid. You can quibble with the details, but however you look at the trend over 10 years it is difficult to escape the conclusion that there has been very little overall progress in the policies of rich countries which affect prospects in poor countries.

Aid agencies and campaigners make a powerful case for increases in aid, and for improving its quality. But many have neglected the other issues which developing countries are increasingly demanding must be addressed and which are likely to be at least as important. This paralysis in the face of a changing agenda should come as no surprise. All aid agencies have to spend their budget wisely and avoid waste (or worse). But working to improve the policies on fisheries, patents or tax is always discretionary, however important it might be. Nobody in the government department responsible for these policies will complain if the development ministry leaves them alone. The people who stand to lose are in developing countries: and they have no voice and no vote when these priorities are set.

In the 21st century development policy is shifting to promoting a fair and effective global economic system, supported by investment in public goods, overseen by effective and legitimate institutions. Aid can help to protect and support who are disadvantaged by change. But aid agencies, NGOs and policy-makers will increasingly have to look beyond the management of aid, for which their organisations are organised, to a much broader agenda and new and unfamiliar ways of working.

Owen Barder is senior fellow and director for Europe at the Centre for Global Development. He tweets as @owenbarder