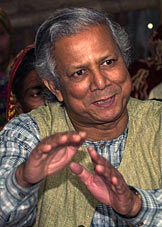 Muhammad Yunus and the Grameen Bank have been awarded the 2006 Nobel Peace Prize.

This is a powerful statement by the committee (which is appointed by the Norwegian parliament) of the role of poverty reduction in promoting peace.

As the Grameen Bank has shown, access to financial services such as credit can make a huge contribution to improving the lives of the poor.

Microfinance has become a very popular cause in international development, especially among the large private foundations of North America.  Supporting microfinance appeals to the notion that we should give the poor a hand up, not a hand out.  It appeals to our sense that we should find ways to unleash the entrepreneurial spirits of those who are unfortunate enough to have been born in poor countries.

But there remain important questions about microfinance.  There remains very little systematic empirical evidence of the impact of microfinance on the incomes and well-being of the poor.  Grameen's main measure of its success – its repayment rate – is impressive but tells us little about what impact microfinance has actually had.

In my view, it is impossible to argue with the view that the poor benefit, probably substantially, from access to affordable financial services, including credit, savings, insurance and remittances.   But as I argued here in November last year, it does not follow at all that it is a good idea for donors and foundations to subsidize microfinance.  After all, the Grameen Bank was developed without donor assistance.

So many congratulations to Muhammad Yunus for his well deserved award, and to the Nobel Peace Prize committee for recognizing the power of economic growth in poor countries to promote peace.  But let's think carefully before we all climb on to the microfinance bandwagon. It is not clear that subsidizing microfinance is a high priority for helping the developing world to grow its way to prosperity.