The Guardian development blog is running a series of end of year reflections on development, including one by me. Many of the articles are upbeat about progress in developing countries, but pessimistic about the short term economic prospects for the industrialised world and for global cooperation to tackle shared global problems.

The series so far includes:

Economic growth has made the developing world less dependent on aid

A new generation of leaders, business friendly policies, technology, the spread of peace, and strong demand for natural resources have helped Africa to withstand the global downturn. 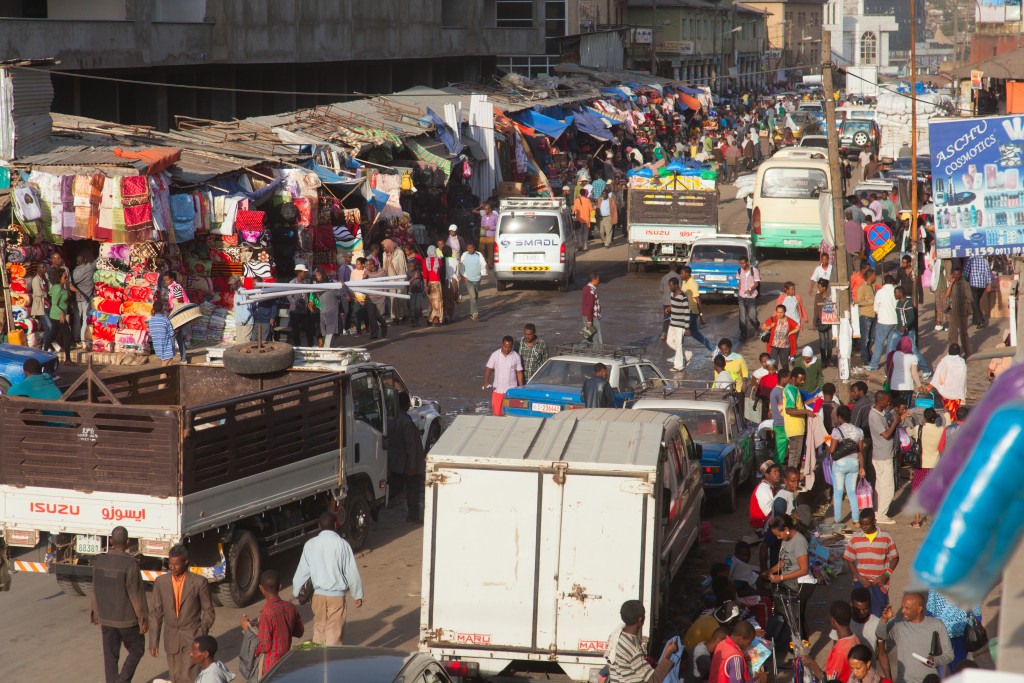 The largest market in Africa – The Merkato, Addis Ababa, Ethiopia.

I celebrated New Year’s Day 2011 in Ethiopia, where we lived for three years. Ethiopia is humming with the optimism and energy of a fast-growing country, creating more jobs, sending more children to school, expanding healthcare, and providing electricity, clean water, sanitation and roads.

Ethiopia’s economy grew by 7.5% this year, and it is not the only country in Africa to boast a high growth rate. Africa has been the fastest growing continent of the past decade. The emergence of a new generation of leaders, the end of the continent’s debt crisis, business-friendly policies, new technologies, the spread of peace, and strong demand for natural resources have helped Africa withstand the global downturn.

Steve Radelet, a former senior fellow at the Centre for Global Development, has documented the emergence of 17 African countries in which total income is growing by more than 5% a year – increasing average incomes by 50% in 13 years. That growth is attracting businesses and investors from Africa and abroad, and the continent’s middle class is expanding. By 2015, about 100m African households will have incomes greater than £2,000 a year, roughly as many as India today.

And as they grow, developing countries are becoming less dependent on aid.

At the start of 2011, we did not expect a year in which so many people would be able to claim their rights and freedom. The Arab spring has moved many of us, but should not have surprised us. Better government has spread across Africa and the Middle East, defying outdated assumptions in the west. Thirteen African countries held national elections in 2011, four leading to a change of government; there will be 13 more in 2012. South Sudan gained its independence after a largely peaceful referendum.

When the year began, we did not know the rains in east Africa would fail. But in contrast to the 1980s, in today’s Ethiopia drought no longer means famine. Unlike its neighbour Somalia, there has been no repeat of the TV images of starving people in Ethiopia. That’s because, with the help of foreign donors, it has put in place early warning, food reserves and distribution systems, and a safety net that supports the poorest families in their own communities.

As developing countries have become more integrated into the world economy, and less dependent on aid, so their interests have changed. The most important international events for developing countries this year were the repeated failures of European leaders to put in place a credible plan to save the euro, the G20’s decision to put the world trade talks out of their misery, and modest progress at the Durban talks on climate change. These will all have more impact on developing countries than gatherings of the “development set” at World Bank meetings, the UN general assembly or the Busan forum on aid effectiveness.

But while progress has been good, it is not yet fast enough. Hundreds of thousands of people in the Horn of Africa will have spent Christmas in refugee camps, and about a billion people will go to bed hungry on New Year’s Eve.

In the years ahead, the Centre for Global Development in Europe will be working with policymakers, researchers and academics to find evidence-based, politically savvy ways for rich countries and powerful institutions to help developing countries lift themselves out of poverty. Our focus is on the world’s efforts to promote shared growth, protect our environment, reinvent our financial system, clamp down on international corruption, encourage and share innovation, reduce inequality and entrench peace.

For affluent and developing countries alike, these are the aspirations for 2012.

3 thoughts on “End of year reflections”