How committed are we to development? 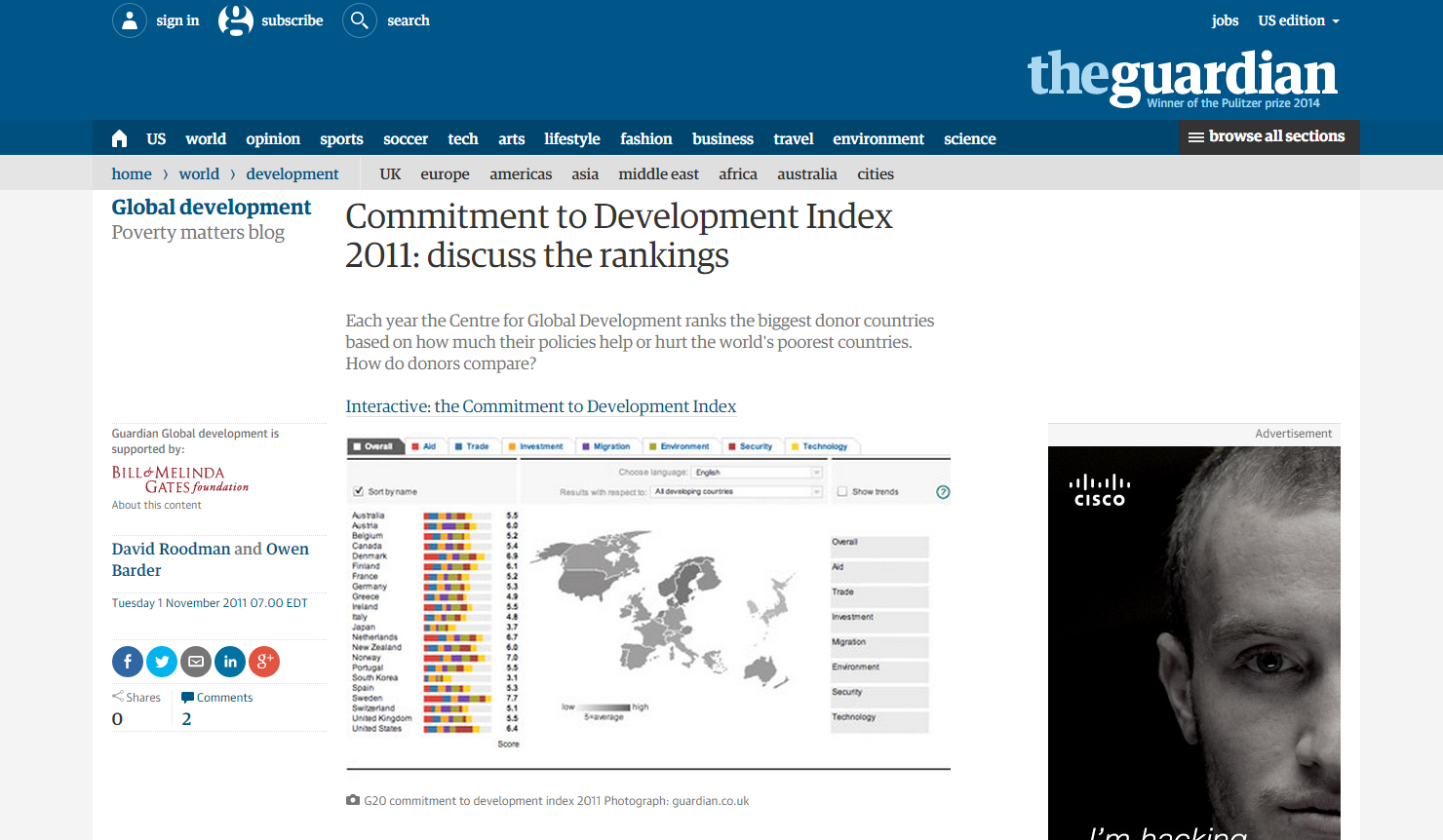 Does Britain’s remarkable political consensus supporting foreign aid obscure a more ambiguous overall footprint in the developing world?Though by no means unanimous, Britain’s cross-party agreement to protect the aid programme from budget cuts is admirable. It reflects an understanding that it is ultimately in the national interest to support development, as well as being the right thing to do.

But there is more to helping poor nations to develop than giving aid. Rich and poor nations are linked in many ways: through trade and investment flows, migration, the environment, military affairs and technology. Governments influence all these channels, for good and ill. They subsidise their own agriculture, undercutting poor farmers overseas. They send peacekeepers to nations that are healing after civil war. They tax petrol, slowing global warming. They promote technological change, but limit its spread through patents.

Poor countries do not want to depend on aid: they want the opportunity to trade and grow and play their full part in the world economy. Their ability to do so depends in part on how the rich and powerful behave. That’s why the Centre for Global Development produces the annual Commitment to Development Index (CDI) to assess rich nations on their overall impact on the developing world. 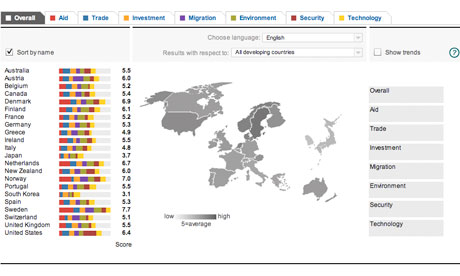 Interactive: the Commitment to Development Index

In the latest index, published on Tuesday, Britain ranks 12th out of 22 countries. As you would expect, Britain scores well on foreign aid (ranking 8th). British aid is respectable for both its quantity, now at 0.51% of national income, and for its quality — the Department for International Development (DfID) tends to avoid parcelling aid out in penny packets, which impose an administrative burden on understaffed recipient governments.

Britain’s place in the CDI, however, is hurt by weaknesses elsewhere. Along with France and the US, it is a major exporter of weapons to undemocratic nations such as Saudi Arabia, which this year deployed its military to put down pro-democracy protesters in Bahrain. That’s why the UK ranks 19th out of 22 on security.

Once again the Nordic countries and the Netherlands come top of the league. Generosity with aid plays a part, but so do progressive policies on the environment (especially, limiting greenhouse gas emissions) and migration (welcoming legal immigrants from developing countries). Japan and South Korea are the least development-friendly, with high barriers to goods and workers from poorer nations and low contributions to foreign aid and peacekeeping operations.

Given the Blair government’s high-profile commitment to Africa, it is interesting to ask whether Britain does well by that continent. In fact it does, which one can see by selecting “sub-Saharan Africa” in the interactive. Doing so zeros in on aid to Africa, barriers to African imports, secondments of troops to peacekeeping in Africa, and so on. The UK comes fourth, behind only Ireland, Portugal and Sweden.

As you can sense, we have packed a lot into the CDI. The interactive lets you explore the details. The index is based on publically available data, and on the Centre for Global Development site you can find all our calculations so you can see how the scores are produced. You can also browse through performance reports for each country, and background papers. For the technically savvy, there are online spreadsheets and databases.

The Centre for Global Development has worked hard to improve the CDI. But it is not an infallible measure of development impact and intent. You can argue about almost every indicator. Are big aid projects always better? What if carbon emissions fall for reasons that have nothing to do with government policy? And should it include economic policies, such as bank regulation and interest rate settings, which also have huge effects overseas?

We welcome such discussion. For us, the real goal is not an infallible index, but more awareness of, and readiness to improve, the full range of policies that affect the lives of the global poor. Aid alone is not the way to measure our footprint in the developing world. The CDI shows that every country can improve on many fronts.

5 thoughts on “How committed are we to development?”