What kind of knickers are you wearing? 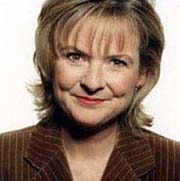 I am confused about why Martha Kearney chose to ask the two Davids what sort of underwear they wear.   If a male interviewer had asked a female politician about her knickers, he would be thrown off the radio. And rightly so.

I have two older sisters, and no brothers.  So I obviously learned some of my language from them. When I went to boarding school, at the age of ten, it took several weeks before I realised that referring to my own underwear – Y-fronts, since you ask – as my "knickers" was not likely to make me popular with the other boys.  Or not the ones I wanted to be popular with.