Would you be tempted to steal for 2 years’ salary? 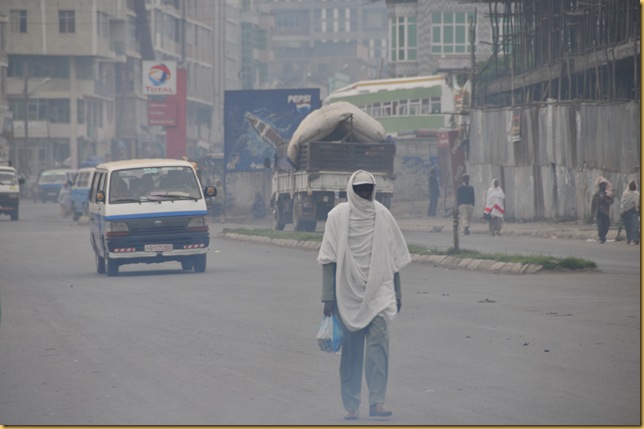 A misty morning in Dessie 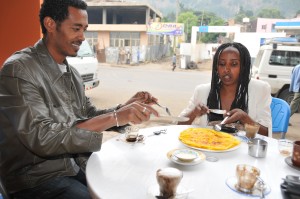 Sharing marsoup with friends in Dessie

There is always a lot going on early in the morning in Ethiopia.  The air is cool in the highlands as the mist burns off, and in the towns people are busy walking to work or school, delivering goods, or going about their business before it gets warm.

At 7am this morning we were sitting at a table outside the Aytegib Cafe in Dessie watching the bustle of the town and having breakfast before setting off for Weldiya.  The streets are shared by pedestrians, donkeys, cars and a few lorries. We had checked out of our motel where our own vehicle had been right at home among the half dozen white Land Cruisers parked in the courtyard labelled with the various brands of local NGOs and aid agencies.  Now at the cafe on the main road, we had ordered ‘marsoup’ – a local breakfast speciality which is a kind of thin omelette served with local honey – and machiato coffee, the ubiquitous availability of which is one of the welcome legacies of Italy’s brief and unwelcome stay in the country.

As our coffees were arriving, the night watchman from our motel appeared at our table.  Had we, by any chance, left this rather fancy smartphone in our room?  Indeed we had.

It is characteristic of Ethiopians that the staff in the motel had not pocketed an expensive phone, worth two to three times the average annual salary in Ethiopia, but had instead immediately set out, at some inconvenience to themselves, to return it to its owners.  The watchman bustled back to work without expecting a tip or reward, and before we were able to give him one.  It is also characteristic of Ethiopia that the hotel staff somehow knew where to find us, even though we had not told anyone that we were stopping in town for breakfast. 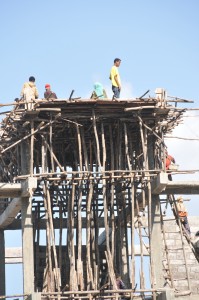 All across Ethiopia, Christians and Muslims have generally had very good relations, dating back to 615AD when followers of the Mohammed (including his wife and cousin) were given refuge by the Aksumite King, Negus Armah or Aṣḥama ibn Abjar.  Ethiopians say that, as a result of the respect that was shown for his followers,  Mohammed gave instructions that Ethiopians were not to be harmed, and that this is why the communities have lived together peacefully ever since.

I had not been to Dessie for eight years.  It was then, and is now a big, bustling, university town in the highlands, famed within Ethiopia for the beauty of its women.  It is recognisable still, but it has grown substantially: there are a lot of new buildings, roads, churches, mosques and shops.  But it retains the same laid back friendliness, and feeling of people getting along, that it has always had.

6 thoughts on “Would you be tempted to steal for 2 years’ salary?”