Running with the lions 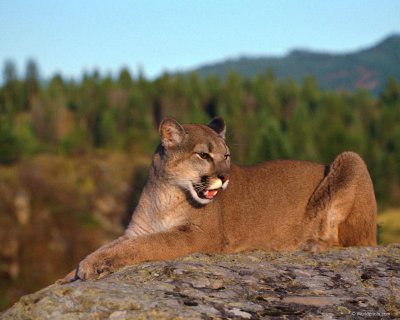 One of the more significant risks of running on trails in Northern California is that there are Mountain Lions.  You hardly ever see them; but they do occasionally attack, kill and eat joggers, so they are best avoided if possible.

So we were somewhat alarmed to stumble across a mountain lion on a remote trail in Harbin, near Calistoga, on Saturday.

The guidebooks say you should look it in the eye, make yourself appear as big as you can (for example, by opening your jacket and waving your arms), make a loud noise (“holler”, as they say here) and generally try to intimidate the poor creature.  Apparently if you turn your back, crouch, or run away, you will be deemed weak and you are likely to end up as cat food.

Fortunately, we didn’t need to do any of those.  The lion saw us long before we saw it, and decided to head away from the trail.  Which is just as well, because it was much bigger than I expected, and I would not have enjoyed looking it in the eye and yelling.  What would you say to it?

2 thoughts on “Running with the lions”