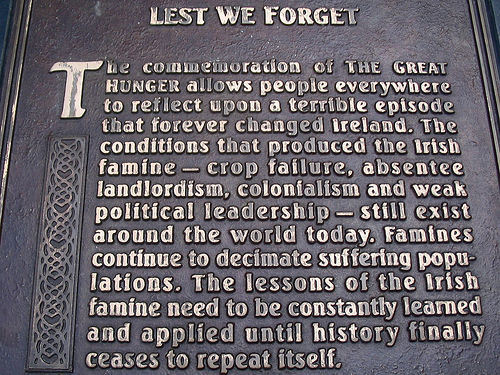 To commemorate the 150th anniversary of the Irish Famine, Boston’s Irish community unveiled a memorial park on June 28,1998.  The park is in downtown Boston, along the city’s Freedom Trail. The text on the plaque reads:

Lest we forget. The commemmoration of the Great Hunger allows people everywhere to reflect upon a terrible episode that forever changed Ireland. The conditions that produced the Irish famine – crop failure, absentee landlordism, colonialism and weak political leadership – still exist around the world today. Famines continue to decimate suffering populations. The lessons of the Irish famine need to be constantly learned and applied until history finally ceases to repeat itself.

9 thoughts on “Lest we forget”