The coming collapse of the development system?

Clay Shirky, who writes about the social and economic effects of the internet, draws on Joseph Tainter’s book, The Collapse of Complex Societies, to describe why complex business models collapse:

Complex societies collapse because, when some stress comes, those societies have become too inflexible to respond. In retrospect, this can seem mystifying. Why didn’t these societies just re-tool in less complex ways? The answer Tainter gives is the simplest one: When societies fail to respond to reduced circumstances through orderly downsizing, it isn’t because they don’t want to, it’s because they can’t.  In such systems, there is no way to make things a little bit simpler – the whole edifice becomes a huge, interlocking system not readily amenable to change. … Furthermore, even when moderate adjustments could be made, they tend to be resisted, because any simplification discomfits elites.

There is obvious and direct relevance to the development system (thanks to @ryanbriggs for making this connection).

The problem starts, according to Tainter, because society’s elite members keep adding new layers of decision-making and complexity:

a group of people, through a combination of social organization and environmental luck, finds itself with a surplus of resources. Managing this surplus makes society more complex—agriculture rewards mathematical skill, granaries require new forms of construction, and so on.  Early on, the marginal value of this complexity is positive—each additional bit of complexity more than pays for itself in improved output—but over time, the law of diminishing returns reduces the marginal value, until it disappears completely. At this point, any additional complexity is pure cost.

This is an almost perfect description of the aid system as experienced on the ground by developing countries.  (I have often wondered if the common empirical finding of diminishing returns to aid is in fact the result of diminishing returns to the number of donors.)  We have more and more donor agencies (the UN has more agencies working in developing countries than there are developing countries).  The burgeoning number of donors impose more contradictory conditions, add transactions costs, drive up the price of scarce resources, and coordination costs grow exponentially.

The Paris Declaration and Accra Agenda for Action are an attempt by the donors to take marginal steps towards simplification in the face of a changing world.   Will this work?   I doubt it, for the reasons set out in my paper Beyond Planning: Markets and Networks for Better Aid.  Here is Clay Shirky’s summary of why marginal steps towards simplification usually fail:

There is, however, one element of complex society into which neither markets nor democracy reach—bureaucracy.  Bureaucracies temporarily reverse the Second Law of Thermodynamics. In a bureaucracy, it’s easier to make a process more complex than to make it simpler, and easier to create a new burden than kill an old one.

A few weeks ago, the country heads in Ethiopia of the European aid agencies met to discuss how they could simplify their work.  It was triggered by a letter of 4th February 2010 from Stefano Manservisi, the Director General for Development in the EU, to the heads of European aid agencies  calling for them to agree a “division of labour” in Ethiopia.  Of course, the meeting was an expensive flop: each donor showed up fully briefed to explain why it is essential that they continue to be involved in every sector.* Rather than streamlining their operations, donors have begun to discuss new layers of complexity, such as the designation of “lead” donors, “focal points” and “silent partners”, so that they can continue to operate as now but under the pretence of greater specialisation.  This was entirely predictable: the bureaucratic and political need to be involved in many sectors in every country is a far more powerful force than the intangible development benefits of simplification.

Where there is a clear need for more simplicity – such as in the delivery of health aid – the system is unable to merge or close institutions, to reduce the number of donors and simplify the way aid is delivered. Instead our response to complexity is to add yet more layers and institutions, such as the International Health Partnership.  Apparently none of the participants sees the irony of creating a new global partnership to tackle the problems caused by the existence of too many global health initiatives. As Tainter predicted: it is easier to make a process more complex than to make it simpler.

Here is another example.  The rise of global health funds led to a collapse in the funding for health systems of developing countries.  Instead of giving money to countries to enable them to build up their network of primary health clinics and to train health workers, money was channeled to the Global Fund and GAVI to buy medicines and bednets.  PEPFAR would pay for brand new laboratories for AIDS, complete with lab technicians and doctors, while the next-door health centre could afford neither staff nor medicines.   The results was a worsening of health care.  How did the aid system respond?  Not by reducing the money flowing to global funds and putting the money back into government health systems using the existing channel of the World Bank: in the meantime the global funds had become too powerful and the bureaucratic capture was too great for that kind of simplification.  So instead these agencies have created a Health Systems Funding Platform, the purpose of which is to “… harmonize and eventually provide support through a joint system funding platform”.  These agencies are now involved in a series of conferences and meetings to figure out to harmonize their work on health systems.  It is obvious to everyone is that neither GAVI nor the Global Fund should be involved in this at all, but there is no way to get them out, or to shift their funding elsewhere, now that they exist.

In 2008 and 2009 I took part in an OECD DAC “Strategic Reflection Exercise” to consider “how to sustain and increase the relevance of the DAC and its subsidiary bodies in the changing development co-operation landscape”. Given the changing relationship between donors and recipient countries, the rise of new donors outside the DAC such as China and the Gates Foundation, the proliferation of global funds, and challenges to the aid model, this would have been a terrific opportunity to chart a new course for the aid system.   I argued that the DAC would remain relevant only if it underwent radical change, including expanding to include a much more diverse range of donors, becoming a partnership of donors and developing countries (and not merely a donor club), and taking on a stronger regulatory function with real teeth rather than just a talking shop with an ace statistical unit attached.  Of course, the bureaucrats from the incumbent aid agencies were not willing to contemplate any of this.  The resulting report consigns the DAC to oblivion in a changing world.

There are signs of coming collapse all around us.  The complexity of the system is accelerating, despite the good intentions of the Paris and Accra declarations, as the system struggles to cope with change.  Here is a graph showing the number of individual aid projects recorded in the AidData database: 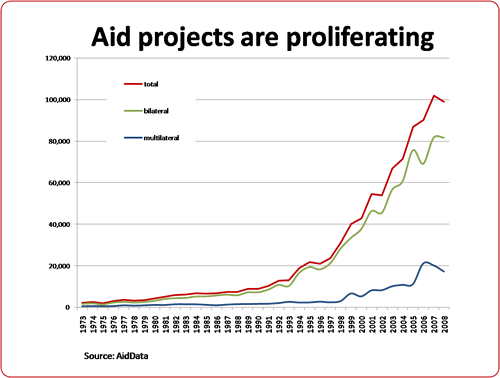 Support for the aid system is beginning to haemorrhage;  Dambisa Moyo’s book, Dead Aid, though it is poorly researched and deliberately misleading, has captured a public mood.  More credible voices, like that of Andrew Mwenda, are speaking out against the aid system.   Donors see China’s rise as an aid donor in Africa as a threat, and huddle together to wonder how they can bring China into their system. (Of course, neither China nor the Gates Foundation is remotely interested in joining the system that donors have built for themselves).

So we may be on the brink of a collapse of the entire “business model”, as traumatic as the closure of newspapers in the United States (the UK is a year or so behind).   Perhaps we should see this as an opportunity, rather than a threat.  Collapse may be the appropriate response, an opportunity to build a new system from the bottom up.  As Clay Shirky observes, rather than trying to rescue the old system, we may be better off looking for new ways to achieve our goals:

When ecosystems change and inflexible institutions collapse, their members disperse, abandoning old beliefs, trying new things, making their living in different ways than they used to. It’s easy to see the ways in which collapse to simplicity wrecks the glories of old. But there is one compensating advantage for the people who escape the old system: when the ecosystem stops rewarding complexity, it is the people who figure out how to work simply in the present, rather than the people who mastered the complexities of the past, who get to say what happens in the future.

* In case you are wondering, it was not somebody from DFID who told me about this.

32 thoughts on “The coming collapse of the development system?”