Last month the OECD published aid data from donors for the period up to and including 2007.  With my colleagues at Development Initiatives, we have done an analysis of the figures for the House of Commons International Development Committee. The full memorandum (as .pdf) is here. 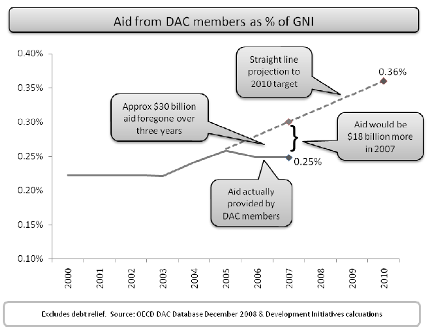 Here are some key points:

In industrialised countries the fiscal “automatic stabilisers” tend to increase spending in recession, which both dampens the macroeconomic effects of the downturn and channels additional funding to services that face additional costs. By contrast the institutional arrangements for providing finance to developing countries tend to mean that finance is reduced just as needs are increasing, which amplifies the economic downturn, increases economic instability and jeopardises poverty reduction and service delivery.