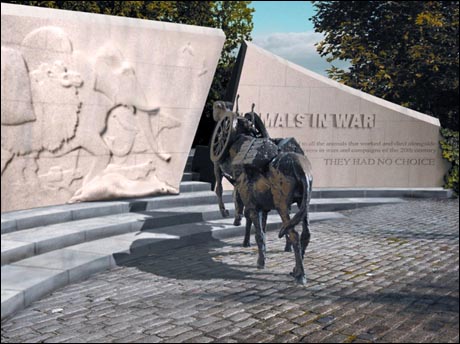 As I was crossing Park Lane today from Hyde Park at Brook Gate, I stumbled across a new "Animals At War" memorial. The memorial, designed by sculptor David Backhouse, is carved from Portland stone, with bronze relief of different animals. The inscription reads:

Animals In War. This monument is dedicated to all the animals that served and died alongside British and allied forces in wars and campaigns throughout time. They had no choice.

The monument lists a variety of animals that have been used in war, including horses, dogs, dolphins, elephants, pigeons and even glow worms. Now, I have been vegetarian since I was a teenager, largely for ethical reasons. (For the record, I would not object to people eating animals if this is necessary for survival; but I do not agree with eating animals for pleasure). But though I think we should accord animals greater ethical status, I cannot persuade myself that this memorial is a good use of anyone’s money. The memorial, which cost £1.4 million, was largely paid for by novellist Jilly Cooper, who formed a trust with Andrew Parker-Bowles (the first husband of Camilla Parker Bowles, who – Camilla, not Andrew – is now Princess of Wales, though we all have to pretend that she is not.) In my view, a more fitting tribute to the animals who died would have been to use this money to help people who need the money to educate their children or have access to the health care they need. Or perhaps it could have been used to build some sporting facilities in Hyde Park, to promote more healthy lifestyles for young people. There is a particularly ludicrous article in the Telegraph about the memorial. Princess Anne is quoted as saying:

Until recently, most of our relationships with animals have been as a working partnership and in any working partnership, there’s an inherent responsibility to look after one another. I do think it’s important to remember that man’s relationship with the natural world has shared everything – the good times and the bad.

Perhaps we might also have a memorial to the 500,000 animals killed for meat each hour in US alone?