Chris Blattman and Bernd Beber are looking at the economics of child soldiering.  Why do rebel armies, such as the Lords Resistance Army in Uganda, recruit adolescents?  According to Blattman and Beber, because younger children are ineffective soldiers; and adults are too difficult to indoctrinate.

Chris Blattman has this graph 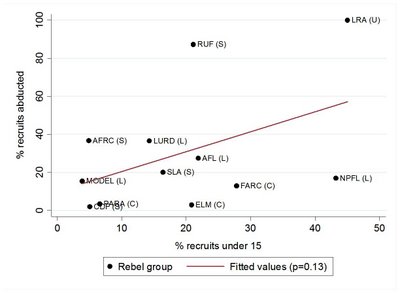 What I find interesting about this work is that from premises which sound intuitively plausible, Chris and Bernd then arrive at policy conclusions that are initially counterintuitive:

Chris calls himself a political scientist, rather than an economist. But I think this is exactly the sort of work that economists, at their best, should be doing.  This work is a fascinating combination of insights into human motivation and incentives, and the use of quantitative techniques to test whether those ideas correspond to the world we observe.