Back in 2009 a paper by Robinson, Yu, Zeller & Felten called on governments to require that official websites obtain their data from the same infrastructure as they make available to the public:

Such a rule incentivizes government bodies to keep this infrastructure in good working order, and ensures that private parties will have no less an opportunity to use public data than the government itself does. The rule prevents the situation, sadly typical of government Web sites today, in which governmental interest in presenting data in a particular fashion distracts from, and thereby impedes, the provision of data to users for their own purposes.

This is a very powerful idea. If governments use their own open data to drive their websites, they are more likely to ensure that this data provides a consistent, usable, comprehensive source of information, and they have an incentive to ensure that it is kept accurate and up to date.  If information is sufficiently important to be part of what governments want to tell the public about, it ought to be important enough to be included in their open data feed.  Everyone in government could do without the costs and hassle of maintaining and trying to reconcile different sources of information, and of keeping multiple data systems up to date and consistent. When governments use their own open data in real time, there is, at last, ‘one version of the truth’ available to everyone.

This principle is sometimes known as ‘dogfooding’, after the Google slogan that employees should ‘eat their own dogfood’ by using the companies’ own products in-house, enabling them to discover quickly what works and what needs to be improved.

The new DFID “Development Tracker” is powered by DFID’s open data feed; making it, as far as I know, the first UK government department to implement the principle of dog-fooding.

The DFID data is in an internationally agreed format known as IATI, which is also used by 130 other organisations around the world; and the software is open source. This means that the Development Tracker website can be adapted easily to display information from any of those organisations, and a global community can work together develop the tool further, reducing the costs to each organisation of publishing their data in a user-friendly way.

Other UK government departments, and other aid agencies and development organisations around the world, should look carefully at this example. For example, the US Foreign Assistance Dashboard could and should be powered by the information which is (or will be) provided by the US government through IATI.

The dogfooding principle may seem technical, but if it were widely adopted it would have an important impact on the quality and usability of government data. DFID should be commended for leading the way.

Now the fun part for development geeks: traceability.  DFID is increasingly insisting that organisations which receive funding from DFID should themselves comply with the IATI data standard.  Built into that standard is a mechanism which allows funds to be traced as they flow from one organisation to another.

You can see this beginning to work if you look at the Development Tracker page for the Global Poverty Action Fund (GPAF), which funds civil society organisations, worth about £40 million a year.  The management of the fund has been contracted out to Triple Line Consulting.  The “partners” tab in the Development Tracker shows which organisations have received funding so far from this fund. 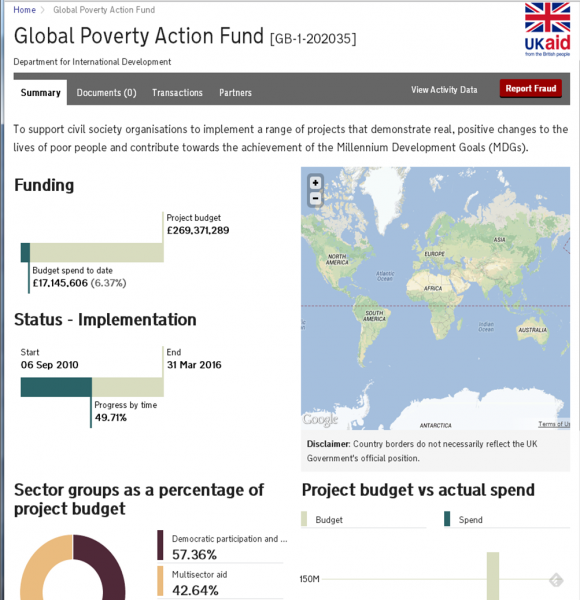 Here comes the exciting bit. If you click the Tearfund entry in this list of grants, you will get the details of how Tearfund have spent the money given to them through GPAF, including the project documents and logframes.  This information comes automatically from Tearfund’s own published IATI data.

The breakdown of how GPAF money has been used, and the ability to follow it through the implementing organisation, has not been laboriously constructed manually: it was created automatically by the website. This is possible because both DFID and Tearfund are using the IATI standard to publish their data, and both are publishing in sufficient detail. Because Tearfund has included in their data the information that this expenditure was financed by GPAF, the website has automatically joined the two reports together.

This example demonstrates that we can follow money through three steps in the aid delivery chain: DFID  -> GPAF (managed by Triple Line) -> Tearfund. The same mechanism works just as well for longer funding and delivery chains (which are sadly, very common in development).  It also works when more than one donor is putting money into the same funding pot, which is then split up among many different organisations.  All that is required is for everyone in the chain to provide accurate information through IATI. This is information that implementing organisations already have, and are already required to provide to donors: all that is needed is for other donors to follow DFID’s lead by requiring that they publish it as IATI-compliant open data.

The Development Tracker therefore demonstrates that traceability works not only in principle but in practice. As more and more implementing organisations – private companies, consultancies and NGOs – comply with DFID requirements to report their activities through IATI, so it will be possible for UK taxpayers, and everybody else, to trace money through the system from British taxpayer to spending on the ground (and to see how much gets lost on the way).

I predict that once people see this working in practice, the dominoes will fall quickly. No legislator or aid administrator anywhere in the world will want to have to explain why British taxpayers can see where their aid is going, but their own citizens cannot. Firms or NGOs which are unwilling to be open about how they spend aid money will find themselves excluded from being able to receive it. Traceability will become the new normal, and we will look back in amazement at a time when it was not thought to be possible.