The singular pleasure of being part of a successful team

I am in Rome, at the launch of the Advance Market Commitment.  Under this scheme, a group of donors is promising to use $1,500 million to buy a new vaccine, if it is developed, which protects against the strains of pneumococcal infection that are common in the poor countries.

This is important because nearly 2 million children die of pneumo-related illnesses each year.  Children in rich countries are routinely vaccinated against these diseases.  But there is no vaccine for poor countries, for two reasons.  First, the vaccine has been developed to protect against the strains of the disease that are common in North America and Europe, and it is much less effective in poor countries.  The vaccine has not been extended to cover the strains of pneumo common in poor countries because the market is not big enough to warrant the R&D needed.  Second, even if such a vaccine existed,  the market is too small and unreliable for firms to invest in the high volume mass production that is needed to supply large volumes at low costs to cover the developing world.  The commitment made yesterday by rich countries to buy a suitable vaccine, meeting internationally recognized standards for efficacy and safety, could transform the economics of development of new vaccines.

Pause briefly on how radical this policy is.  There is a social need for extra R&D and investment in production facilities.  But instead of paying researchers to do that research – which might or might not succeed, they are creating market incentives and allowing competition to do the rest. The donors create a reward for the private sector – the prospect of a lucrative market for vaccines – which enables firms to invest in developing and producing the needed vaccines.  But if the research fails it will cost the donors nothing.  The taxpayer will only have to cough up if the vaccines are actually developed and used.  And if the vaccine is used, it will save more than 5 million lives over the next quarter of a century – at $300 per life saved, a bargain in development terms.  For firms, this is attractive because it creates a whole new market for their products, and enables them to serve poor country markets on a commercial basis, rather than as an act of corporate social responsibility.  And for developing countries, they have the prospect of access to new vaccines, which in the past have taken 15-20 years to be mass produced cheaply enough for them to be widely used in developing countries.  So this is an results-based, market-oriented, hard-headed partnership between donors, developing countries and the pharmaceutical industry which, if it works, will 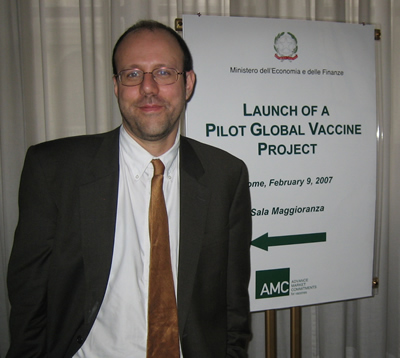 solve one of the most important health challenges on the planet.

This scheme was the idea of a brilliant economist, MIchael Kremer, who is an economics professor at Harvard.  (He is pictured to the right, at the launch yesterday in Rome).   Michael is unusual in developing economic ideas with important real-world application.

Michael's idea was developed into a policy proposal by a working group convened by the Center for Global Development (where I used to work).

What was special about that group was that it brought together people from academia, development, industry, and the non-profit sector, and professional backgrounds including economics, law, public health and public policy.

No individual member of that team could have devised the programme that they came up with together.  The interaction of public health expertise, economic theory, practical industry experience, and public policy lead to a proposal that addressed the possible challenges of this idea, and forged a strong shared understanding of how this proposal could work.

Ruth Levine at CGD, in particular, is brilliant at bridging gaps in understanding, perspective and motive, and at forging agreement among diverse groups.  John Hurvitz, a lawyer from Covington and Burling,, was able to translate between industry and activists, and his draft contract, which formed part of the CGD report, was the cornerstone of being able to show that it would be legally possible for donors to make this commitment.  Amie Batson at the World Bank worked tirelessly against short deadlines to manage the technical work that donors required.  Carlo Monticello at the Italian Finance Ministry led the work for G8 Finance Ministers, like the conductor of a huge, multinational orchestra.   Orin Levine, who heads up the group responsible for building understanding of and demand for a pneumo vaccine, brings unrivalled technical knowledge, passion for the mission, and a self-exaggerated naiivety about the byzantine process of international policy-making.  Andrew Jones, the urbane Canadian responsible for this work at GAVI, is ever-practical, looking for the way forward.  And many other people worked round the clock to build this idea into a clear, practical idea.

Apart from agreement among this group of experts, the other vital ingredient was the vision of a group of political leaders.  Finance Ministers are not known for their generosity – that isn't their job.  But finance ministers from Italy – from both parties – and Gordon Brown from the UK quickly grasped the simple elegance of this solution, to harness markets and the profit motive to address a challenge of huge social importance.  It was their leadership, more than anything, that focused everyone's minds and energies on how to make this happen.

I cannot think of any comparable examples of how an idea has been developed by a brilliant academic, worked up into a policy proposal, and taken up by policy-makers.  I first heard of this idea in 1998, when Michael Kremer mentioned it to me over lunch one day. The simplicity of the idea – create incentives for the development of new vaccines by promising to buy them if they are developed – appealed to me then as it does today.  Since then, I have watched the idea evolve and take a more defined shape.  At times I have been partly involved in helping the idea along.  It has been fascinating and illuminating to watch it grow from a simple idea to a pledge yesterday of $1.5 billion to buy a pneumo vaccine if one is developed.

Some of the team were here in Rome yesterday for the launch.  We felt like a non-league side that has won the FA cup. It is a group of people that have argued, fought, laughed, cried, debated and persuaded amongst ourselves for three years.    We agree about much, and bring much passion to what we disagree about.   We have learned to trust each other.  We have learned that each of us is as committed to the same goal – saving lives by getting the best possible vaccines to as many kids as possible as soon as we can.  We have become great friends, across divides of geography, training, age and institution.

We sat together having a celebratory dinner in Rome last night, chattering about the excitement of the day and tryng to forget how much work there
is still to do on the nitty gritty of making this happen.

I realized then that the achievements I am most proud of in my life so far have all involved being part of a team.  The budgets we put together, working late into the night in the Treasury; the new system of budgeting and public financial management we developed for Nelson Mandela's government in South Africa; even the races I have helped organize in London – in every case, it was the satisfaction of achieving something together, much more than any of us could dream of doing on our own, that has been the most rewarding and memorable part of the experience.

I will never have children, so I will never know what it is like to lose a child.  My friends probably won't lose their children either, because we have developed and made available the vaccines for our own communities to protect against these common but preventable diseases.  This new Advance Market Commitment for a pneumo vaccine will advance by ten years or more the speed with which vaccines will be developed and used in poor countries. Not just one but millions of mothers will be spared the anguish and pain of losing their child as a result of this decision.

So to the team who has developed this idea, and seen it through to the launch yesterday in Rome – and you know who you are – I thank you, for letting me be a part of something very special, and giving me something to be proud of.