This post is a longer, more detailed companion to my article published today at the Atlantic Community.  You might want to read that first. Here I include a gratuitous but friendly swipe at a caricature of the views of Bill Easterly.

Almost every successful complex system became successful through a process of evolution.

Complex animals are the result of generations of evolution: of random mutation of genes (variation) and then survival of the fittest (selection).  That is how complex animals, superbly adapted to their environment, come into existence.   In market economies firms and products are launched  (variation). If customers like their products, and if the firms are efficient, they will grow; if not the firm will fail (selection). That is why well-functioning markets tend to have efficient firms which make products that customers  want.  Political movements spring up (variation) and do well if they are popular with the electorate (selection).

At the end of The Selfish Gene, Richard Dawkins invented the notion of a meme, an idea which tends to reproduce itself in a community such as a fashion, culture, value, melody or belief.  He describes how societies with successful memes (“Don’t marry your cousin”) tend to do better than societies with memes that do them harm (“Humans make a tasty dinner”).

The development system is a complex system, but it would be excessively kind to claim that it is a successful one.  There are many initiatives to design a new “aid architecture”  which are unlikely to succeed; and even if they did, do we really want to wait another half a century until we can agree the next new design?  What we need instead is to instill into the development system mechanisms that force it to evolve as circumstances change.

In development, we have quite a lot of variation but not enough selection.

There are too many, rather than too few, organisations and projects in development.  Here in Ethiopia, nine sectors have 20 donors or more (including health, governance, education, water, agriculture, infrastructure), and according to the DAC database there were 1 840 projects by aid donors in Ethiopia in 2007.  Globally the UN has more agencies working in development than there are developing countries, and there are more than a hundred global funds working in the health sector alone.

It isn’t just DAC donors and multilaterals that are proliferating.  In Ethiopia there are more than 3 500 NGOs, almost entirely funded from overseas. As with official aid agencies, some of these NGOs are outstanding.  Some are well-meaning but ineffective.  Some are charlatans and rent-seekers.  Ethiopians are shrewd judges of which are which.  But the ineffective agencies and NGOs and the charlatans, and some very duff projects, still get funded year after year.

I recently met a European bureaucrat sent to “build capacity” at the Africa Union, whose headquarters are here in Addis Ababa.   As we ran together in the hills above Addis where Ethiopian athletes train, he told me frankly that his project was a complete waste of time. No surprise: we have known the shortcomings of the way donors give “technical assistance” for more than forty years.  But there is nothing in the aid system that forces organisations to stop wasting money on projects that everybody knows will never work.

A slight disagreement with Bill Easterly 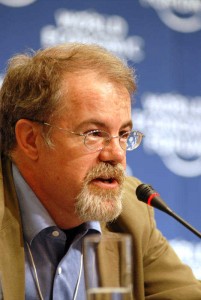 This is where I partly disagree with my friend and fellow blogger, Bill Easterly (or to be more accurate, I disagree with the following caricature of his view).  Bill argues in The White Man’s Burden that there are too many “planners” and not enough “searchers” in development.  He is robustly critical of anyone with anything resembling a grand plan, and consistently sceptical of the aid industry’s habit of herding towards the next big thing (microfinance, agriculture, etc).  He calls for more experimentation, and more small scale programmes grounded in local realities.

I’m all for lots of experimentation: an evolutionary process needs variation. But the evolutionary force missing in the aid system is not variation but selection.    For the evolutionary process to work, there has to be some process by which more resources are channelled to effective aid, and resources are taken away from things that don’t work.  If not a planner, then there has to be some sort of decision maker to make this happen.  Bill seems to agree with this in principle –  the AidWatchers prize for Best In Aid went to the “smart giving” movement which encourages private donors to give more money to effective organisations.  But if ever someone suggests that a particular approach appears to be work and ought to be scaled up, Bill pops up and accuses them of being a planner, or of diverting scarce resources to their pet cause at the expense of the myriad of other grass roots programmes being promoted by searchers.

While I agree with Bill’s robust scepticism, and his demand for more rigorous evidence, I think he focuses too much on the need for more “searchers” and does not sufficiently focus on the need for stronger selective pressures. I agree that we don’t want a plan, but we do need some way of doing more of what works, and doing less of what does not, and that in turn requires some sort of institutions to channel aid to priorities.  But Bill is apparently allergic to any sort of institution playing this role.

There is a  movement which advocates a suite of sensible measures, including:

I’m in favour of all these things, and I would like to see more of them.  But they are all essentially “top down” mechanisms for selection, in which the pressure comes from wise outsiders who decide what is working.

Other complex systems do not rely on top down intervention to force selection (unless perhaps you believe in theistic evolution, in which change occurs through the external intervention of a benign deity.)  Tesco is not the largest supermarket in the UK because the government has conducted thorough monitoring and evaluation of its outputs and outcomes.   We do not used randomised controlled trials to decide which coffee shops should stay open.   Political parties win elections by getting votes, not because they have convinced a higher authority of the quality of their log-frames.

We should not exaggerate the market metaphor: development work is not exactly like a market, and anyway few markets operate well without some kind of central regulation.  But it isn’t neoliberal faith in markets to say we should look for more bottom-up ways to enhance selective pressure in development, so that the decisions are not made by benign deities from outside (even ones who know who to do randomised trials) but by the people who are supposed to benefit from the aid.

In a recent TED talk David Cameron spoke of a post bureaucratic age in government, in which citizens are able to improve services through greater local accountability.   More use of top down evaluation, with consultants flying in to conduct rigorous baseline surveys and measure results of treatment and control groups, however rigorous and independent, does not feel very ‘post bureaucratic’ to me.

There are increasingly many examples of bottom-up mechanisms towards better accountability in development, many of which are enabled by growing access to communications and technology.  Ingredients of this revolution include:

Oddly, many of these efforts to empower the poorest to direct resources themselves are opposed by some people working in development who regard themselves as progressive.  It is hard to escape the feeling that this opposition may owe more to concern for their own job satisfaction than for the interests of the poor.

It is not a straight choice between top down and bottom up accountability: there are hybrid models.  An important trend in development assistance over the last decade has  been efforts to encourage greater accountability of developing country governments to their own citizens, so that aid given to governments is better used in the service of the poor. This is a big part of the thinking behind the combination of budget support and Poverty Reduction Strategies.   Creative ideas are now emerging for strengthening the feedback loop from the intended beneficiaries of aid programmes to the overseas decision makers (such as ALINE and Guidestar), so combining top-down selection with bottom-up information about effectiveness.  These long chain accountability mechanisms are important, but they seem to me to be a second-best to giving poor people themselves direct influence over how resources are used.

Complex systems become and stay effective through a process of evolution: this requires variation and selection.  The development system contains quite a bit of variation, but not enough selective pressure.  Proposals for more effective top-down selective pressure should be supported, but the real prize is finding better ways to increase selective pressure from the people whom these programmes are intended to support.

6 thoughts on “Variation and selection: improving the development system”